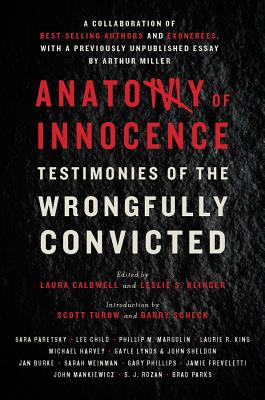 Testimonies of the Wrongfully Convicted

Recalling the great muckrakers of the past, an outraged team of America’s best-selling writers unite to confront the disasters of wrongful convictions.

Wrongful convictions, long regarded as statistical anomalies in an otherwise sound justice system, now appear with frightening regularity. But few people understand just how or why they happen and, more important, the immeasurable consequences that often haunt the lucky few who are acquitted, years after they are proven innocent.

Now, in this groundbreaking anthology, fourteen exonerated inmates narrate their stories to a roster of high-profile mystery and thriller writers—including Lee Child, Sara Paretsky, Laurie R. King, Jan Burke and S. J. Rozan—while another exoneree’s case is explored in a previously unpublished essay by legendary playwright Arthur Miller. An astonishing and unique collaboration, these testimonies bear witness to the incredible stories of innocent men and women who were convicted of serious crimes and cast into the maw of a vast and deeply flawed American criminal justice system before eventually, and miraculously, being exonerated.

Introduced by best-selling authors Scott Turow and Barry Scheck, these master storytellers capture the tragedy of wrongful convictions as never before and challenge readers to confront the limitations and harsh realities of the American criminal justice system. Lee Child tells of Kirk Bloodsworth, who obsessively read about the burgeoning field of DNA testing, cautiously hoping that it held the key to his acquittal—until he eventually became the first person to be exonerated from death row based on DNA evidence. Judge John Sheldon and author Gayle Lynds team up to share Audrey Edmunds’s experience raising her children long distance from her prison cell. And exoneree Gloria Killian recounts to S. J. Rozan her journey from that fateful "knock on the door" and the initial shock of accusation to the scars she carries today.

Together, the powerful stories collected within the Anatomy of Innocence detail every aspect of the experience of wrongful conviction, as well as the remarkable depths of endurance sustained by each exoneree who never lost hope.

Praise For Anatomy of Innocence: Testimonies of the Wrongfully Convicted…

Filled with the triumphs and tragedies of the wrongfully convicted, Anatomy of Innocence is an important book. Every story barrels at us and should both challenge and scare us. They are haunting, harrowing and hopeful.

A unique collection of 15 wrongful conviction sagas bound to shake faith in the American criminal justice system…A searing, unforgettable anthology, with valuable insights provided at the end of each chapter by the editors.
— Kirkus Reviews (starred review)

Laura Caldwell is the award-winning founder/director of Life After Innocence at Loyola University Chicago School of Law and the author of fourteen novels, including the Izzy McNeil series, as well as Long Way Home. She lives in Chicago, Illinois.