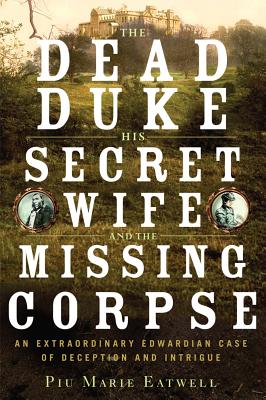 The Dead Duke, His Secret Wife, and the Missing Corpse

An Extraordinary Edwardian Case of Deception and Intrigue

One of the most notorious and bizarre mysteries of the Edwardian age, for readers who loved The Suspicions of Mr. Whicher.

In 1898, an elderly widow, Anna Maria Druce, came to the British court with an astonishing request. She stood among the overflowing pews of St. Pauls Cathedral claiming that the merchant T. C. Druce, her late father-in-law, had in truth been a secret identity for none other than the deceased and enormously wealthy 5th Duke of Portland. Maintaining her composure amid growing agitation from the clutch of lawyers, journalists, and curious onlookers crowded into the church, Mrs. Druce claimed that Druce had been the duke's alter ego and that the duke had, in 1864, faked the death of his middle-class doppelgänger when he grew tired of the ruse. Mrs. Druce wanted the tomb unlocked and her father-in-law's coffin exhumed, adamant that it would lie empty, proving the falsehood and leaving her son to inherit the vast Portland estate. From that fateful afternoon, the lurid details of the Druce-Portland case spilled forth, seizing the attention of the British public for over a decade.

As the Victoria era gave way to the Edwardian, the rise of sensationalist media blurred every fact into fiction, and family secrets and fluid identities pushed class anxieties to new heights. The 5th Duke of Portland had long been the victim of suspicion and scandalous rumors; an odd man with a fervent penchant for privacy, he lived his days in precisely coordinated isolation in the dilapidated Welbeck Abbey estate. He constructed elaborate underground passageways from one end of his home to the other and communicated with his household staff through letters. T.C. Druce was a similarly mysterious figure and had always remained startlingly evasive about his origins; on his arrival in London he claimed to have "sprung from the clouds."

Drawing from revelations hidden within the Druce family tomb in the chilly confines of Highgate Cemetery, Piu Marie Eatwell recounts one of the most drawn-out sagas of the era in penetrating, gripping detail. From each thwarted investigation and wicked attempt to conceal evidence to the parade of peculiar figures announcing themselves as the rightful heir, Eatwell paints a portentous portrait of England at the dawn of the Edwardian age.

Few tales—be they by Charles Dickens or Wilkie Collins, The Importance of Being Earnest or The Strange Case of Dr. Jekyll and Mr. Hyde—could surpass the bizarre and deliciously dark twists and turns of the Druce-Portland affair. A mesmerizing tour through the tangled hierarchies of Edwardian England, The Dead Duke, His Secret Wife, and the Missing Corpse illuminates the lies, deceit, and hypocrisy practiced by "genteel" society at the time—and their inevitably sordid consequences.

Praise For The Dead Duke, His Secret Wife, and the Missing Corpse: An Extraordinary Edwardian Case of Deception and Intrigue…

As the best books in this genre do, Eatwell's narrative expands to give us a broad view of the cultural and social circumstances existing in England in the late 19th and early 20th centuries…Her book is also a reminder that no matter what stories have captured popular tastes right now…nothing quite takes your breath away like a Novemberish tale that turns out to be real.
— Nick Owchar - Los Angeles Review of Books

A superb unraveling of a sensational mystery—and an absolutely gripping read.
— David King, best-selling author of Death in the City of Light

A lively account of the light shone on the lies, deceit and hypocrisy of Victorian society.
— Times (London)

Fusing an excellent historical eye with an engaging narrative…Eatwell's history is equal parts bizarre and literary, presenting the emphasis without bias so that, until the very end, it’s unclear who’s telling the truth. This true crime story would be perfect fodder if Law & Order ever decides to launch a 19th-century spinoff.

It’s Downton Abbey meets The Addams Family in Piu Marie Eatwell’s The Dead Duke, His Secret Wife, and the Missing Corpse, a delightfully offbeat history of a bizarre Edwardian legal case that became tabloid fodder and kept the British public spellbound for a decade…. Eatwell’s marvelous book reads like a Wilkie Collins gothic novel, but at times truth is stranger than fiction.

Madness, guilt, eccentricity, subterfuge—Piu Marie Eatwell's study of the Druce case has it all: the eccentric dukes, liaisons below stairs, extraordinary claims in courts of chancery, exhumations, high-Victorian catacombs, famous detectives. Like all good whodunits, the story of the Duke of Portland and his fortune makes compelling reading.
— M. J. Trow, author of the Inspector Lestrade detective series

An eccentric duke, a mysterious claimant to the title, a long legal battle to open a grave in pursuit of a huge fortune—it's a thoroughly engrossing story, in the best traditions of Mr. Whicher.
— Nicholas Best, author of Five Days That Shocked the World

Piu Eatwell is the author of Black Dahlia, Red Rose and The Dead Duke, His Secret Wife, and the Missing Corpse and has produced and researched historical documentaries for the BBC and other channels, including the widely acclaimed film Charles Manson: The Man Who Killed the Sixties. She divides her time between Paris and London with her husband and three children.

As the Edwardian era progressed, being born into the aristocracy was no longer the only way for someone to possess prestige and wealth. How did increasing social mobility and changing definitions of the term “gentleman” impact the intrigue surrounding the Druce-Portland case?

The Strange Case of Dr. Jekyll and Mr. Hyde and The Importance of Being Earnest are presented here as examples of popular literature highlighting characters who fabricate alternate identities or personalities. Why was deceit such a popular and salient idea in the late Victorian era?

Anna Maria Druce became a celebrity after she came forward and claimed her father-in-law was the 5th Duke of Portland. Do you think this case would have been treated differently if Anna Maria Druce’s husband had been able to approach the British court in her place? How so?

How did vast changes in the media industry affect the case, and how it was received by the general public?

How are the 5th Duke of Portland and T.C. Druce similar? How are they different? Do these similarities and differences support or disprove the accusation that both men were the same person?

There are many popular historical figures that kept scandalous secrets and lived multiple lives: Charles Dickens, Henry Wainwright, John Maxwell, and Oscar Wilde among them. What made the Druce-Portland affair so lurid in comparison to other incidences of deception documented at this time?

Why do you think the 5th Duke of Portland would want to live a second life as a member of the middle-class? Why would any member of Edwardian society want multiple identities?

Were you surprised when the contents of T.C. Druce’s coffin were finally revealed? How do you think delaying the exhumation of the coffin helped or hindered claims to dukedom made by T.C. Druce’s legitimate children?