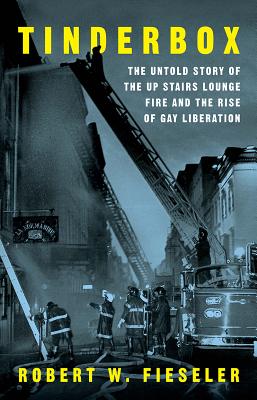 It's indescribably moving to learn in a final author's note that survivors hesitant to speak on the record for Tinderbox came forward with urgency after the Pulse massacre. Their testimonies, Fieseler's rigorous research and his amiable prose make this a vital, inspiring volume in the annals of gay history.

Very moving.... Eloquent... haunting. The structure reminds one of Thornton Wilder’s classic novel The Bridge of San Luis Rey, in which the individual fates of a disparate group of people united by a bridge collapse are described.... The description of the fire, pieced together bit by bit from interviews with survivors and archival research, is so painstakingly done.... The heart of this book concerns the individual stories Fieseler has assembled. These make his book far more than just a history of gay rights; they make it an infinitely sad portrait of what these people went through.

Fieseler unflinchingly recounts the fire and sets it firmly in the context of the times.
— Bill Daley, Chicago Tribune

Fieseler's work is an essential piece of historical restitution that takes us from 1973 to 2003, when homosexuality was finally decriminalized in Louisiana. Powerfully written and consistently engaging, the book will hopefully shed more light on the gay community's incredible and tragic journey to equality. A momentous work of sociological and civil rights history.
— Kirkus Reviews, "Best Books of the Year"

Robert W. Fieseler is a recipient of the Pulitzer Traveling Fellowship and the Lynton Fellowship in Book Writing. A writer for Buzzfeed, Narratively, and elsewhere, he currently resides in New Orleans.
Loading...
or support indie stores by buying on