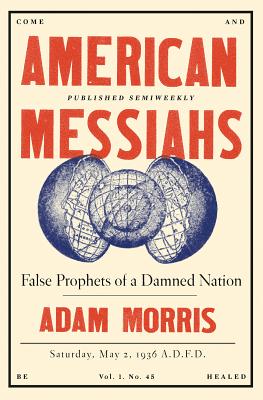 False Prophets of a Damned Nation

A history with sweeping implications, American Messiahs challenges our previous misconceptions about “cult” leaders and their messianic power.

Mania surrounding messianic prophets has defined the national consciousness since the American Revolution. From Civil War veteran and virulent anticapitalist Cyrus Teed, to the dapper and overlooked civil rights pioneer Father Divine, to even the megalomaniacal Jim Jones, these figures have routinely been dismissed as dangerous and hysterical outliers.

After years of studying these emblematic figures, Adam Morris demonstrates that messiahs are not just a classic trope of our national culture; their visions are essential for understanding American history. As Morris demonstrates, these charismatic, if flawed, would-be prophets sought to expose and ameliorate deep social ills—such as income inequality, gender conformity, and racial injustice. Provocative and long overdue, this is the story of those who tried to point the way toward an impossible “American Dream”: men and women who momentarily captured the imagination of a nation always searching for salvation.

Praise For American Messiahs: False Prophets of a Damned Nation…

Scholar and journalist Morris examines the theological, ideological, and personal relationships among a series of American spiritual leaders over the course of two centuries in his captivating debut.... Morris's research is extensive, and his reconstruction of his subjects' complex personal histories is impressive.... A fine examination of a series of Americans whose lives and missions shed light on the dominant institutions and values they sought to subvert.

Adam Morris is a writer and literary translator whose work has appeared in the Times Literary Supplement, the Believer, the Los Angeles Review of Books, Salon, and elsewhere. He lives in San Francisco.
or support indie stores by buying on