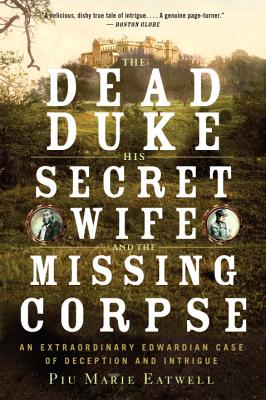 The Dead Duke, His Secret Wife, and the Missing Corpse

An Extraordinary Edwardian Case of Deception and Intrigue

A Book Riot Best Book of the Year

At the close of the Victorian era, as now, privacy was power. The extraordinarily wealthy 5th Duke of Portland had a mania for it, hiding in his carriage and building tunnels between buildings to avoid being seen. In 1897, an elderly widow asked the court to exhume the grave of her late father-in-law, T. C. Druce, under the suspicion that he’d led a double life as the 5th Duke. The eccentric duke, Anna Maria contended, had faked his death as Druce, and her son should inherit the Portland millions. Revealing a dark underbelly of Victorian society, Piu Marie Eatwell evokes an era when the rise of sensationalist media blurred every fact into fiction and when family secrets and fluid identities pushed class anxieties to new heights.

Praise For The Dead Duke, His Secret Wife, and the Missing Corpse: An Extraordinary Edwardian Case of Deception and Intrigue…

Too good a book to spoil.
— Daily Beast

A reminder that no matter what stories have captured popular tastes right now…nothing quite takes your breath away like a Novemberish tale that turns out to be real.
— Nick Owchar - Los Angeles Review of Books

A superb unraveling of a sensational mystery—and an absolutely gripping read.
— David King, best-selling author of Death in the City of Light

A lively account of the light shone on the lies, deceit and hypocrisy of Victorian society.
— Times (London)

Piu Eatwell is the author of Black Dahlia, Red Rose and The Dead Duke, His Secret Wife, and the Missing Corpse and has produced and researched historical documentaries for the BBC and other channels, including the widely acclaimed film Charles Manson: The Man Who Killed the Sixties. She divides her time between Paris and London with her husband and three children.
Loading...
or
Not Currently Available for Direct Purchase