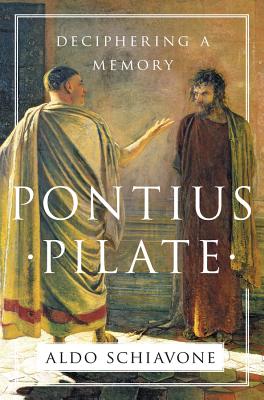 A world-renowned classicist presents a groundbreaking biography of the man who sent Jesus of Nazareth to the Cross.

The Roman prefect Pontius Pilate has been cloaked in rumor and myth since the first century, but what do we actually know of the man who condemned Jesus of Nazareth to the Cross? In this breakthrough, revisionist biography of one of the Bible’s most controversial figures, Italian classicist Aldo Schiavone explains what might have happened in that brief meeting between the governor and Jesus, and why the Gospels—and history itself—have made Pilate a figure of immense ambiguity.

Pontius Pilate lived during a turning point in both religious and Roman history. Though little is known of the his life before the Passion, two first-century intellectuals—Flavius Josephus and Philo of Alexandria—chronicled significant moments in Pilate’s rule in Judaea, which shaped the principal elements that have come to define him. By carefully dissecting the complex politics of the Roman governor’s Jewish critics, Schiavone suggests concerns and sensitivities among the people that may have informed their widely influential claims, especially as the beginnings of Christianity neared.

Against this historical backdrop, Schiavone offers a dramatic reexamination of Pilate and Jesus’s moment of contact, indicating what was likely said between them and identifying lines of dialogue in the Gospels that are arguably fictive. Teasing out subtle but significant contradictions in details, Schiavone shows how certain gestures and utterances have had inestimable consequences over the years. What emerges is a humanizing portrait of Pilate that reveals how he reacted in the face of an almost impossible dilemma: on one hand wishing to spare Jesus’s life and on the other hoping to satisfy the Jewish priests who demanded his execution. Simultaneously exploring Jesus’s own thought process, the author reaches a stunning conclusion—one that has never previously been argued—about Pilate’s intuitions regarding Jesus.

While we know almost nothing about what came before or after, for a few hours on the eve of the Passover Pilate deliberated over a fate that would spark an entirely new religion and lift up a weary prisoner forever as the Son of God. Groundbreaking in its analysis and evocative in its narrative exposition, Pontius Pilate is an absorbing portrait of a man who has been relegated to the borders of history and legend for over two thousand years.

A fresh perspective…and, in the process, offers new insights into the final days of Jesus…Schiavone’s account nicely lures Pilate out of the shadows, albeit briefly, even providing a measure of rehabilitation.
— Randall Balmer - New York Times Book Review

In this slender, elegantly translated work geared toward
lay readers, Schiavone navigates between memory—by the four writers of the
Gospels, especially John, ‘the closest to the context of first century Palestine’—and
history—Josephus and Philo of Alexandria, ‘two first-century intellectuals’—to
help in the reconstruction of these contested events . . . . A levelheaded,
engaging reading of the Gospels and historical account that forms a solid sense
of this pivotal personage and his role on the epic stage.
— Kirkus Reviews

Aldo Schiavone is the author of Spartacus and was a professor of Roman law at the Istituto Italiano di Scienze Umane, which he founded. A member of the American Academy of Arts and Sciences, he lives in Rome.

Jeremy Carden lived in Italy from 1987 to 2014. Now based in the UK, he works as a freelance translator.
Loading...
or
Not Currently Available for Direct Purchase