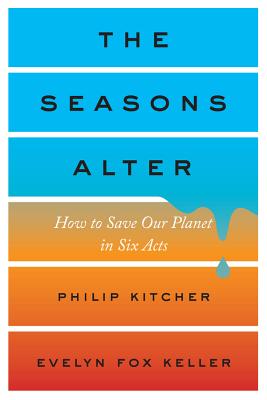 How to Save Our Planet in Six Acts

A landmark work of environmental philosophy that seeks to transform the debate about climate change.

As the icecaps melt and the sea levels rise around the globe—threatening human existence as we know it—climate change has become one of the most urgent and controversial issues of our time. For most people, however, trying to understand the science, politics, and arguments on either side can be dizzying, leading to frustrating and unproductive debates.

Now, in this groundbreaking new work, two of our most renowned thinkers present the realities of global warming in the most human of terms—everyday conversation—showing us how to convince even the most stubborn of skeptics as to why we need to act now. Indeed, through compelling Socratic dialogues, Philip Kitcher and Evelyn Fox Keller tackle some of the thorniest questions facing mankind today:


These crucial questions play out through familiar circumstances, from an older husband and wife considering whether they should reduce their carbon footprint, to a first date that evolves into a passionate discussion about whether one person can actually make a difference, to a breakfast that becomes an examination over whether or not global warming is really happening. Entertaining, widely accessible, and thoroughly original, the result promises to inspire dialogue in many places, while also giving us a line of reasoning that explodes the so-far impenetrable barriers of obfuscation that have surrounded the discussion.

While the Paris Agreement was an historic achievement that brought solutions within the realm of possibility, The Seasons Alter is a watershed book that will show us how to make those possibilities a reality.

Praise For The Seasons Alter: How to Save Our Planet in Six Acts…

Philip Kitcher and Evelyn Fox Keller have reimagined the bitter, confusing debate over climate change as a series of clear-eyed, fair-minded dialogues between people who care about one another even when they disagree. Setting stereotypes and shouting aside, Kitcher and Keller set out the strongest, most nuanced versions of arguments on all sides. The science is lucidly explained; the politics is candidly confronted. This book models what a civil, civic conversation about the biggest issue facing the planet should look like.
— Lorraine Daston, director of the Max Planck Institute for the History of Science

The public discourse over human-caused climate change risks becoming stale if we fail to continually find new and inventive narratives for communicating the science and its implications to the public. In that vein now comes The Seasons Alter, a brilliant treatment of the topic that employs conversation and real human emotions to convey its message of urgency and hope.

Full of information and organized as a series of intense, but civil, conversations, this volume models the kinds of interactions we need to have across our disagreements about climate change and what we can or ought to do to avoid its worst consequences.
— Helen E. Longino, Clarence Irving Lewis Professor of Philosophy, Stanford University

Climate change demands action, but denial, doubt, and delay stand in the way. Philip Kitcher and Evelyn Fox Keller aim to overcome these obstacles by offering examples of careful, constructive, and cordial conversations. The Seasons Alter shows not only how to think but also how to talk about climate action.

Their goal is to take the issue much further than most public conversations ever go, to present as many conflicts as possible, and then refute them . . . . Plenty of facts and valid points are presented here, and readers facing their own climate skeptics will appreciate being able to consult a source of ready-made arguments.
— Colleen Mondor - Booklist

Philip Kitcher is a professor of philosophy at Columbia University and one of the most influential philosophers of science in the past two decades.

Evelyn Fox Keller, a recipient of both MacArthur and Guggenheim fellowships, is a professor emerita at MIT.
Loading...
or
Not Currently Available for Direct Purchase