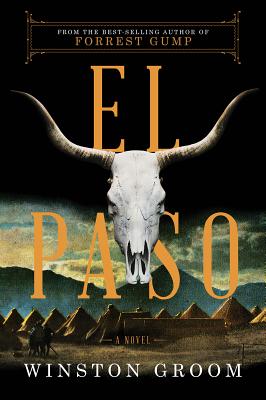 Three decades after the first publication of Forrest Gump, Winston Groom returns to fiction with this sweeping American epic.

Long fascinated with the Mexican Revolution and the vicious border wars of the early twentieth century, Winston Groom brings to life a much-forgotten period of history in this sprawling saga of heroism, injustice, and love. El Paso pits the legendary Pancho Villa against a thrill-seeking railroad tycoon known only as the Colonel—whose fading fortune is tied up in a colossal ranch in Chihuahua, Mexico. But when Villa kidnaps the Colonel’s grandchildren and absconds into the Sierra Madre, the aging New England patriarch and his son head to El Paso, hoping to find a group of cowboys brave enough to hunt down the Generalissimo. Replete with gunfights, daring escapes, and an unforgettable bullfight, El Paso becomes an indelible portrait of the American Southwest in the waning days of the frontier, one that is “sure to entertain” (Jackson Clarion-Ledger).

Winston Groom is the author of twenty previous books, including Forrest Gump, Conversations with the Enemy (Pulitzer Prize finalist), Shiloh 1862, and The Generals. He served in Vietnam with the Fourth Infantry Division and lives in Point Clear, Alabama.

Praise For El Paso: A Novel…

Groom has unleashed a new work of imaginative, peripatetic fiction. . . . [El Paso] is a rich and engrossing tale — something Hollywood will, no doubt, take little time to notice.


[Groom] combines military savvy with storytelling skill for a satisfying saga pitting an American railroad tycoon against Mexican revolutionary Pancho Villa…An engaging epic that could be headed for the bestseller lists and then the big screen. This is the big one that fans have been waiting for, and they’ll grab it up like they would a delicious box of chocolates.
— Michele Leber

El Paso is sure to entertain. . . . To Groom, the public is likely to say, ‘Welcome back to the land of fiction.’

Winston Groom proves life — and fiction — really is like a delicious box of chocolates. . . . The novel has it all — heroes, villains, family, rescues, shootouts, cattle, bits of history and much more. And maybe a feature film in its future?
— Celeste Williams

Groom’s expansive, rich novel is set in the harsh deserts and mountains of northern Mexico during the 1916 Mexican revolution, with sharply drawn fictional characters in a bloody mix with Gen. Pancho Villa and a cast of true-life personalities. . . . Battles, a tense prisoner exchange, and clever ransom negotiations round out this historically vivid and marvelously complex tale.

Dark and daring, El Paso does for the West what Gump did for the South — it takes a tumultuous, crucial time in American history and feeds it to us in ways acute and unforgettable.

El Paso has the drama, coincidence and class intrigue of Dickens's Great Expectations in a setting reminiscent of Larry McMurtry's Lonesome Dove. . . . In Groom's capable hands, this history mixes easily into what is at its core a story of family, class warfare, loyalty and the violence of revolution.