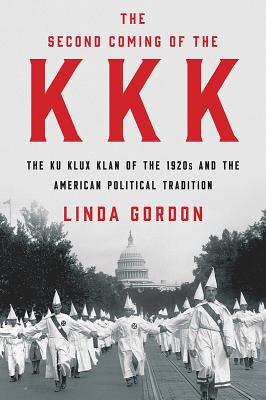 The Second Coming of the KKK

An urgent examination into the revived Klan of the 1920s becomes “required reading” for our time (New York Times Book Review).

Extraordinary national acclaim accompanied the publication of award-winning historian Linda Gordon’s disturbing and markedly timely history of the reassembled Ku Klux Klan of the 1920s. Dramatically challenging our preconceptions of the hooded Klansmen responsible for establishing a Jim Crow racial hierarchy in the 1870s South, this “second Klan” spread in states principally above the Mason-Dixon line by courting xenophobic fears surrounding the flood of immigrant “hordes” landing on American shores. “Part cautionary tale, part expose” (Washington Post), The Second Coming of the KKK “illuminates the surprising scope of the movement” (The New Yorker); the Klan attracted four-to-six-million members through secret rituals, manufactured news stories, and mass “Klonvocations” prior to its collapse in 1926?but not before its potent ideology of intolerance became part and parcel of the American tradition. A “must-read” (Salon) for anyone looking to understand the current moment, The Second Coming of the KKK offers “chilling comparisons to the present day” (New York Review of Books). 8 pages of illustrations

Praise For The Second Coming of the KKK: The Ku Klux Klan of the 1920s and the American Political Tradition…

The Klan of the 1920s, less violent but far more wide¬spread, is a different story, and offers some chilling comparisons to the present day. . . A thoughtful explanation of the Klan’s appeal in the fast-urbanizing America of the 1920s, which was leaving behind an earlier nation based, in imagined memory, on self-sufficient yeoman farmers, proud blue-collar workers, and virtuous small-town businessmen, all of them going to the same white-steepled church on Sunday.
— Adam Hoschschild - New York Review of Books

A must-read for anyone wondering over the last several months how we ended up as a country—with the first African-American president not even a year out of office—facing a group of golf shirt-wearing young white men marching onto the campus of a prestigious university carrying torches and chanting ‘Jews will not replace us” . . . . Gordon documents not only the mechanics of how the Ku Klux Klan roared back to power, both socially and politically, in the 1920s but why. The parallels between then and now, branding differences aside, could not be more evident. To say it one more time for those who wish it weren’t so, the past isn’t dead and it’s not even past; and those who don’t learn from it are doomed to repeat it. . . . Histories like Gordon’s should help Americans understand the roots of these toxic ideologies, as well as the circumstances that help them flourish, in order to better spot them when they sprout.
— Erin Keane - Salon

The Second Coming of the KKK illustrates how the 1920s reboot of the Ku Klux Klan was regarded as rather ordinary and respectable, much like today's efforts to make everyday racism, sexism, and anti-Semitism acceptable again. . . With the help of a couple of savvy public relations pros, Klan membership spread like wildfire, enveloping Northerners and Westerners in love with the idea of defining themselves by what they were not.

Gordon is a thorough and perceptive historian . . . There’s more to The Second Coming of the KKK than grim déja vu. There are lessons too.

Set aside your preconceptions about the Klan, from the era of Reconstruction. As the distinguished historian Linda Gordon demonstrates in this chilling account, the KKK of the 1920s was urban, northern, and modern. Its wizards and dragons used the latest tools of mass advertising to spread their message of ‘true Americanism’: racial purity, religious intolerance, and opposition to immigration. Its members, one in six of whom were women, favored women’s suffrage. Its campaign of terror ended not long after it began, but it left on American politics its dark mark.
— Jill Lepore, author of The Secret History of Wonder Woman

The Second Coming of the KKK reminds us that we Americans bid good riddance to serial aberrations in the civic and social life of our republic repeatedly, only to learn that these phenomena are as American as apple pie. Gordon’s timely, crisply written, indispensable primer helps explain why another aberration is now upon us.

A first-rate historian can show us the past in a way that clarifies the present. That’s what Linda Gordon does here…[The Second Coming of the KKK] reminds us that the sentiments that powered the reprise of the Klan have never been entirely absent from American life, and cannot be understood as an aberrant strain that might be entirely eliminated from the national character.

An excellent historical treatment of an almost forgotten yet very dangerous period of hate in America. What a history lesson for today’s electorate.
— Morris Dees, founder of the Southern Poverty Law Center

At once thoughtful, fair, and deeply troubling, The Second Coming of the KKK exhibits the analytical wisdom of a master historian who sharply reminds us that popular mass mobilizations can be instruments of depredation.

— Ira Katznelson, author of the Bancroft Prize–winning Fear Itself

As the author amply shows, [the Klan’s] fearful, angry spirit lives on. A revealing, well-researched—and, unfortunately, contemporarily relevant—investigation of the KKK's wide support in the 1920s.
— Kirkus Reviews

Linda Gordon, winner of two Bancroft Prizes and the Los Angeles Times Book Prize, is the author of The Second Coming of the KKK, Dorothea Lange and Impounded, and the coauthor of Feminism Unfinished. She is the Florence Kelley Professor of History at New York University and lives in New York and Madison, Wisconsin.
Loading...
or support indie stores by buying on