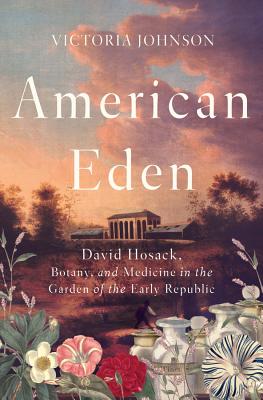 David Hosack, Botany, and Medicine in the Garden of the Early Republic

Finalist for the Pulitzer Prize (History)

On a clear morning in July 1804, Alexander Hamilton stepped onto a boat at the edge of the Hudson River. He was bound for a New Jersey dueling ground to settle his bitter dispute with Aaron Burr. Hamilton took just two men with him: his “second” for the duel, and Dr. David Hosack.

As historian Victoria Johnson reveals in her groundbreaking biography, Hosack was one of the few points the duelists did agree on. Summoned that morning because of his role as the beloved Hamilton family doctor, he was also a close friend of Burr. A brilliant surgeon and a world-class botanist, Hosack—who until now has been lost in the fog of history—was a pioneering thinker who shaped a young nation.

Born in New York City, he was educated in Europe and returned to America inspired by his newfound knowledge. He assembled a plant collection so spectacular and diverse that it amazes botanists today, conducted some of the first pharmaceutical research in the United States, and introduced new surgeries to America. His tireless work championing public health and science earned him national fame and praise from the likes of Thomas Jefferson, James Madison, Alexander von Humboldt, and the Marquis de Lafayette.

One goal drove Hosack above all others: to build the Republic’s first botanical garden. Despite innumerable obstacles and near-constant resistance, Hosack triumphed when, by 1810, his Elgin Botanic Garden at last crowned twenty acres of Manhattan farmland. “Where others saw real estate and power, Hosack saw the landscape as a pharmacopoeia able to bring medicine into the modern age” (Eric W. Sanderson, author of Mannahatta). Today what remains of America’s first botanical garden lies in the heart of midtown, buried beneath Rockefeller Center.

Whether collecting specimens along the banks of the Hudson River, lecturing before a class of rapt medical students, or breaking the fever of a young Philip Hamilton, David Hosack was an American visionary who has been too long forgotten. Alongside other towering figures of the post-Revolutionary generation, he took the reins of a nation. In unearthing the dramatic story of his life, Johnson offers a lush depiction of the man who gave a new voice to the powers and perils of nature.


Praise For American Eden: David Hosack, Botany, and Medicine in the Garden of the Early Republic…

If Rockefeller Center is haunted, a likely candidate for the ghost is David Hosack, the doctor-botanist who assembled a major plant collection on the site starting in 1801.... Victoria Johnson’s American Eden unearths Hosack, who was lauded in his lifetime but largely forgotten since. Hosack’s Columbia lectures were, as one student said, “as good as the theater,” and so is Johnson’s storytelling. She weaves his biography with threads of history — political, medical and scientific — and the tale of an up-and-coming New York City. An innovative medical practitioner, he was the friend and doctor Hamilton and Burr had in attendance on that July morning along the Weehawken cliffs for their ill-starred duel. Did Lin-Manuel Miranda’s Hamilton leave you with an appetite for more? American Eden will not disappoint.... In her ambitious and entertaining book Johnson connects past to present. David Hosack’s garden may have been short-lived, but in our parks, gardens, medical practices and pharmacology, his efforts continue to bear fruit.

[A] captivating biography… Along the way, [Victoria Johnson] restores this attractive polymath—who today is mainly remembered, thanks to a small role in a certain hip-hop musical, as the doctor-in-attendance at the 1804 duel between two of his patients, Aaron Burr and Alexander Hamilton —to his rightful place in American history. The rescue from oblivion is long overdue…. Johnson, an associate professor of urban planning at Hunter College and an authority on botanic gardens, never allows her subject’s many achievements to weigh down her narrative. She writes trippingly, with engaging fluency and wit. She has a lovely way of conjuring up early New York and its denizens—the workers calling out as they unload cargo at the docks; the gentlemen crowding into the Tontine Coffee House for the news of the day. The book’s botany-related passages are particularly vivid. The author writes of plants delightedly, precisely—as Hosack himself might have done.
— Penelope Rowlands, The Wall Street Journal

Lucky is the biographer
who can resurrect a forgotten figure and retrieve a major reputation lost to the
passage of time. In this captivating and intensely readable book, Victoria
Johnson rescues the remarkable life of Dr. David Hosack, physician and botanist
extraordinaire and a towering benefactor of New York and the early republic. A
welcome achievement.
— Ron Chernow, author of Grant and Alexander Hamilton

Lively…. Victoria Johnson follows Hosack’s life and legacy through a range of detail and social context which answers all the answerable questions. Evocations of ‘pastoral Manhattan’ run through the story, reminding us what has been concreted over and lost.
— Robin Lane Fox, Financial Times

American Eden is one of those rare books…it surprises by its originality, it impresses with its deep scholarship and it seduces with its beautiful writing. Victoria Johnson has the gift of a storyteller and the tenacity of a detective…her descriptions of medicine, botany and politics in the early Republic are not only compelling but also exquisitely researched.

You’ve listened to Hamilton, you devoured the Alexander Hamilton biography. But you might not have read up on David Hosack, the American botanist and doctor who accompanied Hamilton and Burr on their fateful duel. While he wasn’t paid in advance, he was treated with civility, and in American Eden: David Hosack, Botany, and Medicine in the Garden of the Early Republic, you can read more about his life as a pioneering botanist, pharmacologist, and surgeon.

In the fall of 1797 the eldest son of Alexander Hamilton, Philip, fell ill with yellow fever, which was sweeping through New York City. The family doctor, David Hosack, employed an unorthodox treatment of hot baths of Peruvian bark and alcohol and saved the boy's life... Hosack went on to establish the nation's first botanical garden—the Elgin Botanic Garden—in the place that is now Rockefeller Center and to launch the American era of botany. He used the Elgin collection to conduct some of the earliest methodical research on the medicinal properties of plants, including poppies from which opiates are derived and the two plants that would later be involved in the development of aspirin.
— Andrea Gawrylewski, Scientific American [Editors' Book Recommendations]

Victoria Johnson's American Eden is the kind of history I love: deeply researched, evocative of its time, and fascinating at every turn. It follows the life of David Hosack, early American doctor, botanist, New Yorker, and bon vivant, whose life touched the famous on both sides of the Atlantic. Hosack was there when Alexander Hamilton took a bullet; Hosack greeted the Marquis de Lafayette on his triumphal return in 1824; Hosack founded North America's first botanic garden on the land where Rockefeller Center now stands in midtown Manhattan. Where others saw real estate and power, Hosack saw the landscape as a pharmocopeia able to bring medicine into the modern age.

American Eden is an exhaustively researched, brilliant and lively biography set in the close political, social and intellectual circles of the new Republic by professor of urban planning Victoria Johnson… Johnson's storytelling skills and her thorough knowledge of the period and the science makes this a book that will appeal to history lovers, botanists and gardeners alike.

Victoria Johnson has written an engaging intellectual biography that weaves science into the story of America's founding. American Eden is rich in insights, and it casts a vivid light on the astounding achievements of the nation's first botanist.

— Russell Shorto, author of Revolution Song and The Island at the Center of the World

[A] fine biography . . . . The cast of characters here represents a veritable who's who of the early republic, as Hosack's drive and talent took him into the orbit of Thomas Jefferson, Sir Joseph Banks, Alexander von Humboldt, and Washington Irving. The story's backdrop is richly drawn: Johnson (urban policy & planning, Hunter Coll.) allows readers to imagine the city's prebuilt landscape as it appeared at the end of the 18th century, and how infectious disease was as dangerous a threat to its citizens as war with Britain. Readers will also delight in the details, as Johnson dutifully names Hosack's prized botanical collections. A brilliant evocation of a man and his time.... Plant lovers, history buffs, New Yorkaphiles, those interested in early medicine, even Hamiltonians—all will find this engrossing.
— Library Journal [Starred Review]

An extraordinary book about an extraordinary man, a cosmopolitan visionary of the American future. Integrating an astonishing array of sources into a supple, compelling narrative, Johnson masterfully recounts Hosack’s valiant establishment of a garden flourishing with native and immigrant plants, an Eden for the new nation; fleshes out his friendships with the leaders of the early Republic, all of them, including even Jefferson, Hamilton, and Burr, bound by botany; and recalls his pioneering efforts on behalf of medical and cultural New York. Johnson brings Hosack vividly to life while fully delineating his remarkable civic and scientific achievements.
— Daniel J. Kevles, Stanley Woodward Professor of History Emeritus, Yale University

Plant-lovers and gardeners will savor the tales Johnson discovered about nineteenth-century botanizing and empathize with the trials of saving a garden, the most ephemeral of treasures, for posterity.... American Eden is a worthwhile read for history fans, botany and garden enthusiasts, and everyone interested in the challenge of turning a good idea into a legacy.

American Eden brings to life a young nation and an old New York, deeply known and lovingly peopled by Victoria Johnson. The book paints family portraits of the Founders—Alexander Hamilton, Aaron Burr, Thomas Jefferson, plus their women and children—who orbit around their all-healing doctor, David Hosack. When the doctor blooms into a science pioneer and builds a botanical garden, Johnson gives us a biography of America’s first environmentalist, obsessed with preserving the world’s flora.

— Edward Ball, author of Slaves in the Family

The founding era blooms with rare color in American Eden. In this captivatingly told story of how one man’s quest to cultivate his garden helped build his nation, Victoria Johnson makes a powerful argument for the age of Hamilton as the age of Hosack. She writes eloquently, researches deeply, and thinks creatively, and the result is a fresh, vivid picture of the early republic sure to enthrall readers of biography and history alike.

Victoria Johnson, a former Cullman Fellow, is currently an associate professor of urban policy and planning at Hunter College (City University of New York), where she teaches on the history of nonprofits, philanthropy, and New York City.
Loading...
or
Not Currently Available for Direct Purchase