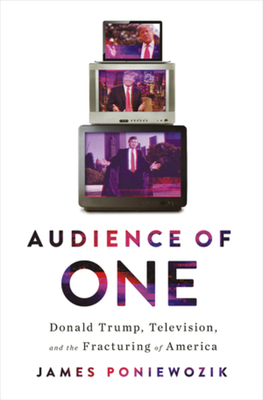 
Praise For Audience of One: Donald Trump, Television, and the Fracturing of America…

The smartest, most original, most unexpectedly definitive account of the rise of Trump and Trumpism we’ve had so far. It’s also the best book yet written about the bride-of-Frankenstein mating of American politics and American pop culture, a wedding practically nobody saw coming until Trump provided the shotgun… [An] uncommonly rich and stimulating book.
— Tom Carson - Bookforum

A dazzling dual biography of television and Donald Trump.... The book is so rich with insights about the man and the medium that it isn’t until the end that readers will realize it’s still not clear how 60 million Americans could come to see an obviously phony performer as the person they wanted in the Oval Office.
— Jessica T. Matthews - Foreign Affairs

James Poniewozik has been the chief television critic of the New York Times since 2015. He was previously the television and media critic for Time magazine and media columnist for Salon. He lives in Brooklyn.
Loading...
or
Not Currently Available for Direct Purchase