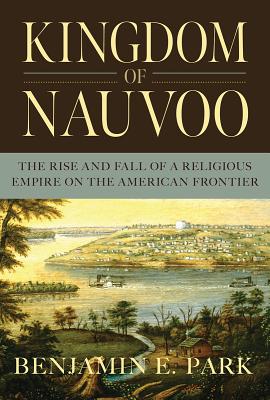 An extraordinary story of faith and violence in nineteenth-century America, based on previously confidential documents from the Church of Jesus Christ of Latter-day Saints.

Compared to the Puritans, Mormons have rarely gotten their due, treated as fringe cultists at best or marginalized as polygamists unworthy of serious examination at worst. In Kingdom of Nauvoo, the historian Benjamin E. Park excavates the brief life of a lost Mormon city, and in the process demonstrates that the Mormons are, in fact, essential to understanding American history writ large.


Drawing on newly available sources from the LDS Church—sources that had been kept unseen in Church archives for 150 years—Park recreates one of the most dramatic episodes of the 19th century frontier. Founded in Western Illinois in 1839 by the Mormon prophet Joseph Smith and his followers, Nauvoo initially served as a haven from mob attacks the Mormons had endured in neighboring Missouri, where, in one incident, seventeen men, women, and children were massacred, and where the governor declared that all Mormons should be exterminated. In the relative safety of Nauvoo, situated on a hill and protected on three sides by the Mississippi River, the industrious Mormons quickly built a religious empire; at its peak, the city surpassed Chicago in population, with more than 12,000 inhabitants. The Mormons founded their own army, with Smith as its general; established their own courts; and went so far as to write their own constitution, in which they declared that there could be no separation of church and state, and that the world was to be ruled by Mormon priests.

This experiment in religious utopia, however, began to unravel when gentiles in the countryside around Nauvoo heard rumors of a new Mormon marital practice. More than any previous work, Kingdom of Nauvoo pieces together the haphazard and surprising emergence of Mormon polygamy, and reveals that most Mormons were not participants themselves, though they too heard the rumors, which said that Joseph Smith and other married Church officials had been “sealed” to multiple women. Evidence of polygamy soon became undeniable, and non-Mormons reacted with horror, as did many Mormons—including Joseph Smith’s first wife, Emma Smith, a strong-willed woman who resisted the strictures of her deeply patriarchal community and attempted to save her Church, and family, even when it meant opposing her husband and prophet.

A raucous, violent, character-driven story, Kingdom of Nauvoo raises many of the central questions of American history, and even serves as a parable for the American present. How far does religious freedom extend? Can religious and other minority groups survive in a democracy where the majority dictates the law of the land? The Mormons of Nauvoo, who initially believed in the promise of American democracy, would become its strongest critics. Throughout his absorbing chronicle, Park shows the many ways in which the Mormons were representative of their era, and in doing so elevates nineteenth century Mormon history into the American mainstream.


Praise For Kingdom of Nauvoo: The Rise and Fall of a Religious Empire on the American Frontier…

Park’s book is a compelling history, built from contemporaneous accounts and from the previously unreleased minutes of the Council of Fifty. . . . Park’s explication of them elevates Kingdom of Nauvoo from pure religious history to the realm of political theory. Park, an ambidextrous thinker, is equally sensitive to the danger the state can pose to religious minorities and to the danger that a religious institution can pose to the secular state. In his account, the early Mormons were a rowdy band of neo-Puritans who mounted a fundamental challenge to the democratic experiment. The tensions that they experienced—between the right to religious freedom and the limits of religious tolerance—still persist today.

[Park] fashions a dense, exciting, and absorbing narrative of the most consequential and dramatic movement to dissent against and secede from the Constitutional republic before the Civil War.
— Ray Olson, Booklist [starred review]

Vigorous study of the early Mormon settlement in Illinois, linking its founding to a rising anti-democratic tradition... A welcome contribution to American religious and political history.
— Kirkus Reviews

[An] enjoyable and fastidiously researched work.... Park, who was given extensive access to the Mormon Church’s archives, entertainingly establishes this little-known Mormon settlement’s proper place within the formative years of the Illinois and Missouri frontier.
— Publishers Weekly

Kingdom of Nauvoo is a fascinating account of Joseph Smith’s attempt to build a ‘beautiful city’ for adherents to the new religion he founded: the Church of Jesus Christ of Latter-day Saints. Benjamin E. Park’s meticulously researched and gracefully written work provides a rich picture, not only of early Mormonism, but of the Jacksonian era in which the movement was born.

— Annette Gordon-Reed, Pulitzer Prize–winning author of The Hemingses of Monticello

Benjamin E. Park’s Kingdom of Nauvoo tells the story of the city the Mormons built in Illinois before crossing the plains to Utah. Making sound use of newly available documents, Park’s story exemplifies the new Mormon history at its best. The author demonstrates the importance of women—including the prophet’s first wife, Emma Smith—in the shaping of Mormon history.

Benjamin E. Park creates a startling picture of Nauvoo, the church, and the nation that all historians of the period will have to grapple with.
— Richard Bushman, professor emeritus of history, Columbia University, and author of Joseph Smith: Rough Stone Rolling

Mormon Nauvoo represents one of the most audacious and consequential religious experiments in US history. Using newly available sources from the men and women who staked their lives to build a new world and redeem the nation, Benjamin E. Park explores the singular interpretation of democracy and political power nourished briefly in the swampy soils of the Mississippi. This engaging study does not shy away from the controversies, the failures, and the deeply held faith that mark an astonishing moment in our past.
— Laurie Maffly-Kipp, Archer Alexander Distinguished Professor, Washington University in St. Louis, and author of Setting Down the Sacred Past

Benjamin E. Park’s concise and engaging narrative of this Mormon ‘empire’ situates it firmly in the context of American political and social development, western expansion, and religious foment, in the process revealing the ways in which the early Church of Jesus Christ was shaped by the forces transforming the nation while also posing a challenge to America’s emerging democratic and capitalist order.
— Amy S. Greenberg, George Winfree Professor of American History and Women’s Studies, Pennsylvania State University, and author of A Wicked War

Benjamin E. Park is assistant professor of history at Sam Houston State University. The author of American Nationalisms, he has written for the Washington Post, Newsweek, and the Houston Chronicle. He lives in Conroe, Texas.
Loading...
or support indie stores by buying on