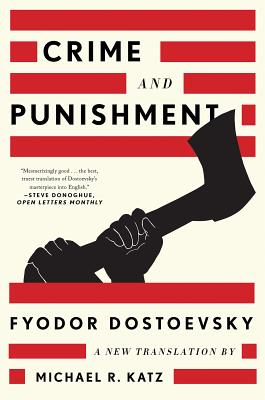 A celebrated new translation of Dostoevsky’s masterpiece reveals the “social problems facing our own society” (Nation).

Published to great acclaim and fierce controversy in 1866, Fyodor Dostoevsky’s Crime and Punishment has left an indelible mark on global literature and on our modern world. Declared a PBS “Great American Read,” Michael Katz’s sparkling new translation gives new life to the story of Raskolnikov, an impoverished student who sees himself as extraordinary and therefore free to commit crimes—even murder—in a work that best embodies the existential dilemmas of man’s instinctual will to power. Embracing the complex linguistic blend inherent in modern literary Russian, Katz “revives the intensity Dostoevsky’s first readers experienced, and proves that Crime and Punishment still has the power to surprise and enthrall us” (Susan Reynolds).

With its searing and unique portrayal of the labyrinthine universe of nineteenth-century St. Petersburg, this “rare Dostoevsky translation” (William Mills Todd III, Harvard) will captivate lovers of world literature for years to come.


Praise For Crime and Punishment: A New Translation…

These are the voices of Crime and Punishment, in all their original, dazzling variety: pensive, urgent, defiant, and triumphant. This new translation by Michael Katz revives the intensity Dostoevsky’s first readers experienced, and proves that Crime and Punishment still has the power to surprise and enthrall us.

Mesmerizingly good…the best, truest translation of Dostoevsky’s masterpiece into English. It’s a magnificent, almost terrifying achievement of translation, one that makes its predecessors, however worthy, seem safe and polite.

Fyodor Dostoevsky wrote The Brothers Karamazov, Crime and Punishment, The Idiot, and many other novels.

Michael R. Katz was born in New York and educated at Williams College and the University of Oxford. He taught Russian language and literature at Williams College, the University of Texas at Austin, and Middlebury College, where he is the C. V. Starr Professor Emeritus of Russian and East European Studies. He is the author of two monographs—The Literary Ballad in Nineteenth-Century Russian Literature and Dreams and the Unconscious in Nineteenth-Century Russian Fiction—and the translator of over fifteen Russian novels into English, including works  by  Turgenev, Dostoevsky, and Tolstoy. He lives in Cornwall, Vermont.
Loading...
or support indie stores by buying on