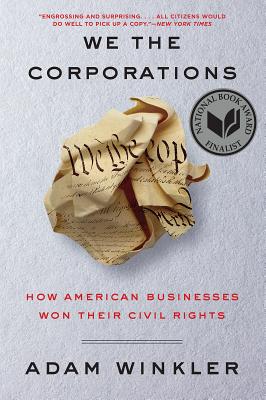 
A landmark exposé and “deeply engaging legal history” of one of the most successful, yet least known, civil rights movements in American history (Washington Post).

Uncovering the deep roots of Citizens United, he repositions that controversial 2010 Supreme Court decision as the capstone of a centuries-old battle for corporate personhood. “Tackling a topic that ought to be at the heart of political debate” (Economist), Winkler surveys more than four hundred years of diverse cases—and the contributions of such legendary legal figures as Daniel Webster, Roger Taney, Lewis Powell, and even Thurgood Marshall—to reveal that “the history of corporate rights is replete with ironies” (Wall Street Journal). We the Corporations is an uncompromising work of history to be read for years to come.

Adam Winkler is a professor at UCLA School of Law, where he specializes in American constitutional law. His scholarship has been cited by the Supreme Court of the United States and his writing has appeared in the New York Times, Wall Street Journal, Washington Post, Los Angeles Times, New Republic, Atlantic, Slate, and Scotusblog.
Loading...
or support indie stores by buying on
(This book is on backorder)