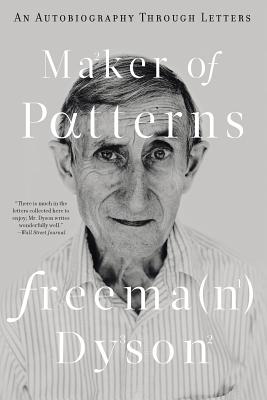 An Autobiography Through Letters

Written between 1940 and the late 1970s, the postwar recollections of renowned physicist Freeman Dyson have been celebrated as an historic portrait of modern science and its greatest players, including Robert Oppenheimer, Richard Feynman, Stephen Hawking, and Hans Bethe. Chronicling the stories of those who were engaged in solving some of the most challenging quandaries of twentieth-century physics, Dyson lends acute insight and profound observations to a life’s work spent chasing what Einstein called those “deep mysteries that Nature intends to keep for herself.” Whether reflecting on the drama of World War II, the moral dilemmas of nuclear development, the challenges of the space program, or the demands of raising six children, Dyson’s annotated letters reveal the voice of one “more creative than almost anyone else of his generation” (Kip Thorne). An illuminating work in these trying times, Maker of Patterns is an eyewitness account of the scientific discoveries that define our modern age.

Professor emeritus at the Institute for Advanced Study, Freeman Dyson is an English-born American theoretical physicist and mathematician. The author of Disturbing the Universe, he lives in Princeton, New Jersey.

Praise For Maker of Patterns: An Autobiography Through Letters…

[The letters] cover a remarkable range of scientific interests, acquaintances, opinions and adventures… He says what you wouldn’t expect; if Dyson has a pattern, perhaps it is contrariety… The one Dysonian pattern for which the letters hold unequivocal evidence is delight. He uses the word often and invokes it even more…Maybe with some people, you don’t look for patterns. You just enjoy their multivariate company.
— Ann Finkbeiner, Nature

There is much in the letters collected here to enjoy; Mr. Dyson writes wonderfully well.
— Ray Monk, The Wall Street Journal

A firsthand account of one of the greatest periods of scientific discovery…. A historic account of modern science and some of its most influential thinkers… An informative collection.
— Library Journal

Who but Dyson formulates revolutionary physics while riding on a Greyhound bus through Iowa cornfields? In other episodes in this remarkable epistolary autobiography, readers join Dyson as he assesses with Gödel equations for a rotating version of Einstein’s universe, as he defends Feynman’s quantum theorems against Oppenheimer’s doubts, and as he explores with Bohr the prospects for a nuclear spaceship. Readers will naturally value what Dyson reveals about how he built his towering reputation as a scientist. But Dyson draws the substance of his narrative from letters he sent his parents between 1940 and 1980, letters in which he discloses quite unscientific aspects of his life—including the joys of romance, marriage, and fatherhood, as well as the trauma of divorce…. Dyson never lets readers forget that, for all of their exceptional intellectual gifts, scientists live human lives defined more by family ties and friendships than by laboratory results.
— Booklist [Starred Review]

Advocates of science will find in Dyson an admirable model. Why go to Mars when we could irrigate the Sahara, he asks. The science of space travel may be 10 times the benefit in the end, he writes, but 'the main purpose is a general enlargement of human horizons.' A pleasure for science students and particularly of science humanely practiced.
— Kirkus Reviews
or
Buy Here
(This book is on backorder)
Copyright © 2020 American Booksellers Association