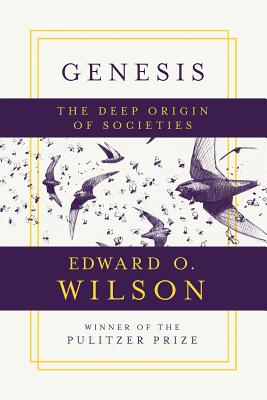 The Deep Origin of Societies

Forming a twenty-first-century statement on Darwinian evolution, one shorn of “religious and political dogma,” Edward O. Wilson offers a bold work of scientific thought and synthesis.

Asserting that religious creeds and philosophical questions can be reduced to purely genetic and evolutionary components, and that the human body and mind have a physical base obedient to the laws of physics and chemistry, Genesis demonstrates that the only way for us to fully understand human behavior is to study the evolutionary histories of nonhuman species. Of these, Wilson demonstrates that at least seventeen—among them the African naked mole rat and the sponge- dwelling shrimp—have been found to have advanced societies based on altruism and cooperation.

Whether writing about midges who “dance about like acrobats” or schools of anchovies who protectively huddle “to appear like a gigantic fish,” or proposing that human society owes a debt of gratitude to “postmenopausal grandmothers” and “childless homosexuals,” Genesis is a pithy yet path-breaking work of evolutionary theory, braiding twenty-first-century scientific theory with the lyrical biological and humanistic observations for which Wilson is known.


Praise For Genesis: The Deep Origin of Societies…

The acclaimed naturalist delivers a pithy summary of evidence for Darwinian evolution of human behavior.... A magisterial history of social evolution, [and] lucid, concise overview of human evolution that mentions tools and brain power in passing but focuses on the true source of our pre-eminence: the ability to work together.
— Kirkus Reviews [starred review]

Wilson (On Human Nature), a Pulitzer Prize winner and Harvard evolutionary biologist, addresses what he calls the six “great transitions of evolution” that led to human society in this ambitious treatise, his 32nd book.... He does an impressive job in this short text of making the nature of the transitions clear.”

Genesis is a beautifully clear account of a question that has lain unsolved at the core of biology ever since Darwin: how can natural selection produce individuals so altruistic that, rather than breeding themselves, they help others to do so?

In his characteristically clear, succinct, and elegant prose, one of our grand masters of synthesis, Edward O. Wilson, explains here no less than the origin of human society.
— Richard Rhodes, winner of the Pulitzer Prize

Endlessly fascinating, Edward O. Wilson - in the tradition of Darwin - plumbs the depths of human evolution in a most readable fashion without sacrificing scholarly rigor.
— Michael Ruse, author of A Meaning of Life

Edward O. Wilson is the author of more than thirty books, including Anthill, Letters to a Young Scientist, and The Conquest of Nature. The winner of two Pulitzer Prizes, Wilson is a professor emeritus at Harvard University and lives with his wife in Lexington, Massachusetts.
Loading...
or support indie stores by buying on