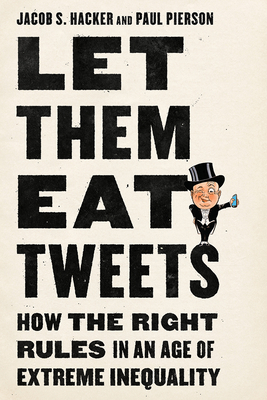 
Praise For Let them Eat Tweets: How the Right Rules in an Age of Extreme Inequality…

[Hacker and Pierson] offer a strong case that the Republican Party’s dependence on its top donors explains much of its trajectory in recent decades, culminating in the rise of Trump. . . . Their historical explanation of how the GOP became radicalized raises legitimate concerns that the party, its judicial appointees and its donor class will carry on 'fomenting tribalism, distorting elections, and subverting democratic institutions, procedures, and norms' regardless of the electoral outcome in November. Those who would resist this development should carefully consider the analysis that Hacker and Pierson lay out in such convincing and depressing detail.
— Geoffrey Kabaservice - The Washington Post

If these two political scientists . . . are painting an accurate picture, we ought to see the same sort of political processes at play in other deeply unequal societies facing crises like pandemics. Turns out we do.
— Sam Pizzigati - Inequality.org

Political scientists Hacker (Yale) and Pierson (Univ. of California, Berkeley) synthesize many scholarly studies and journalists’ reports to mount a compelling . . . argument that what they call ‘plutocratic populism’—reactionary economic priorities and right-wing cultural and racial appeals—dominates the Republican Party, undermining democracy. . . . A cogent and dispiriting contribution to the growing number of analyses of the ailing American democracy.
— Kirkus Reviews

This [is a] barbed and cogent account. . . . Hacker and Pierson pull disparate pieces into a lucid narrative that goes a long way toward explaining the current iteration of the Republican Party. Liberals will be equal parts enraged and edified by this deeply sourced polemic.
— Publishers Weekly


Paul Pierson is a political scientist at the University of California, Berkeley, and the coauthor of three books, including the New York Times bestseller Winner-Take-All Politics. He lives in Berkeley, California.
Loading...
or support indie stores by buying on