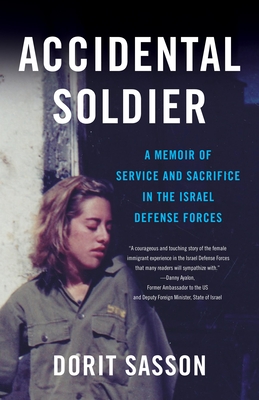 A Memoir of Service and Sacrifice in the Israel Defense Forces

A SheKnows.com and Mind Body and Green Must-Read Featured in Buzzfeed, Working Mother Magazine, The Reading Room, Brit and Co., Writer's Digest, Style, Huffington Post, Jewish Book Council, and Jewish Values Center.
At age nineteen, Dorit Sasson, a dual American-Israeli citizen, was trying to make the status quo work as a college student--until she realized that if she didn't distance herself from her neurotic, worrywart of a mother, she would become just like her. Accidental Soldier: A Memoir of Service and Sacrifice in the Israel Defense Forces is Sasson's story of how she dropped out of college and volunteered for the Israel Defense Forces in an effort to change her life--and how, in stepping out of her comfort zone and into a war zone, she discovered courage and faith she didn't know she was capable of.
or support indie stores by buying on
Copyright © 2020 American Booksellers Association