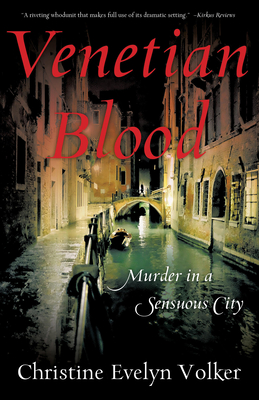 Murder in a Sensuous City

Murderous intrigue in an unforgettable setting. ". . . A] pleasure trip that quickly devolves into a nightmare . . . " --AudioFile Magazine
"A riveting whodunit . . . " --Kirkus Reviews A money launderer. A seduction. An old rivalry. Murders. Fighting to forget a crumbling marriage, Anna, a US Treasury officer, comes to Venice on vacation. A choice she soon regrets. Blackmailed by a money-laundering count, Anna demands he return explicit photos taken during their affair. He refuses. Tracking him to a hotel gala blows up when he is murdered and a dogged police detective accuses Anna of the crime. Anna draws upon her talents in math and science to attack the intricate puzzle of finding the killer among many suspects. They stymie her efforts by hiding secrets and spinning lies in a city built on illusions. Whom can she trust? Pursued, gripped by terror, barely dodging death's dark embrace, Anna struggles to clear her name before police can destroy her alibi and lock her up. But then, as attempts on her life mount, she just might be safer in prison. . . . Readers of psychological mystery will enjoy this story of a brainy heroine battling daunting odds.