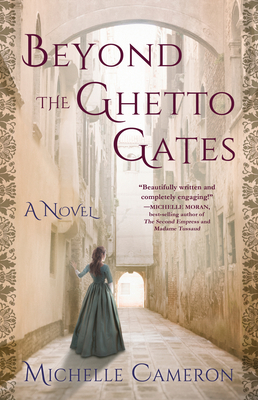 Beyond the Ghetto Gates

When French troops occupy the Italian port city of Ancona, freeing the city's Jews from their repressive ghetto, it unleashes a whirlwind of progressivism and brutal backlash as two very different cultures collide. Mirelle, a young Jewish maiden, must choose between her duty--an arranged marriage to a wealthy Jewish merchant--and her love for a dashing French Catholic soldier. Meanwhile, Francesca, a devout Catholic, must decide if she will honor her marriage vows to an abusive and murderous husband when he enmeshes their family in the theft of a miracle portrait of the Madonna. Set during the turbulent days of Napoleon Bonaparte's Italian campaign (1796-97), Beyond the Ghetto Gates is both a cautionary tale for our present moment, with its rising tide of anti-Semitism, and a story of hope--a reminder of a time in history when men and women of conflicting faiths were able to reconcile their prejudices in the face of a rapidly changing world.

Praise For Beyond the Ghetto Gates…

“Cameron’s vivid page-turner delivers a shattering portrait of love, lust, war, betrayal and faith inside the gates of a famed Jewish ghetto in late 18th century Italy. Best of all, Beyond the Ghetto Gates gives us Mirelle, a brave and brilliant young heroine who learns that faith in one’s self is the greatest faith of all.”


“Against the backdrop of Napoleon’s invasion of Italy, Cameron weaves an immersive tale of a young Jewish woman torn between her filial duty and passion for a young Catholic soldier. Her portrait of Jews and Catholics grappling with social upheaval in an 18th-century harbor town shines a light on the challenges of nationalism, religion, and bigotry that still plague society today.”


—Talia Carner, author of The Third Daughter, Jerusalem Maiden, and others

“In this sweeping saga, Cameron draws a compelling portrait of life in late 18th-century Italy, when the citizens of war-torn Ancona face the challenges of their world transformed by Napoleon’s liberating army. From the Jews who are suddenly freed from the restrictive confines of the city’s ghetto, to the Catholics whose deep devotion is set on fire by a miraculous weeping portrait of the Madonna, Beyond the Ghetto Gates captures the double-edged sword of passion and faith.”

“I devoured this engrossing, passionate story of a young Jewish woman in 1796 who wants only to work with her beloved father in his workshop. But even after Napoleon invades Italy, liberates her city, and breaks down the ghetto gates, customs still enclose Mirelle both as a Jew and a woman. And outside the gates are waiting the riots of anti-Semitism, tragic loss, and a difficult love. These pages are splashed with brilliant colors between the dark corners of this lost world where ghetto buildings are built so close and high that people cannot see the stars. You will live and breathe this young woman’s struggles to have what she wants and still honor her family until the unexpected last paragraphs—and then for a long time after.”


—Stephanie Cowell, author of Claude and Camile, Nicholas Cooke, The Players: A Novel of the Young Shakespeare and others

“What forces are unleashed when the world turns upside down? In Beyond the Ghetto Gates, Cameron tells a story of sweeping romance at a moment in history when the world really was turned upside down—Napoleon’s 1797 conquest of Italy. The campaign challenged the established order of nations and the power of the Church and forever changed the life of Italy’s Jews. In this novel, Cameron vividly imagines the impact these events have on a young Jewish woman of Ancona in her search for love and an independent life. An intimate tale of love vs. duty, of passion vs obligation, set against the backdrop of epic events. This is a historical novel with deep contemporary relevance.”


—Michael Goldfarb, author of Emancipation: How Liberating Europe’s Jews From the Ghetto Led to Revolution and Renaissance

“I fell in love with the protagonist, Mirelle, intelligent, passionate, and determined to find her place and follow her heart in a turbulent time. A totally new and fascinating view of Napoleonic Europe, teeming with well-researched historical detail and characters you’ll root for on every page.”


—Nancy Bilyeau, author of The Blue

“Beyond the Ghetto Gates is one of those novels which is so evocative, so compelling, that after you've finished you're left thinking about the book for days. Beautifully written and completely engaging!”

“Fascinating! Cameron shines a light on a rarely explored facet of the Napoleonic era set in the Italian provinces with a spirited Jewish woman at its center. Laced with vibrant detailing and endearing characters, Beyond the Ghetto Gates is a compelling and satisfying read.”

“With vivid clarity and keen historical insight, Michelle Cameron sweeps us into the unusual setting of Italy during the Napoleonic invasion, and the plight of two courageous women of different faiths, who must fight for their right to love and live during a time of tumultuous upheaval.”

“An intimate coming-of-age story. A defining moment in European and Jewish history. Riveting and memorable.”


—Mitchell James Kaplan, award-winning author of By Fire, By Water, Into the Unbounded Night, and Rhapsody

“Michelle Cameron’s powerful novel Beyond the Ghetto Gates is a passionately compelling saga of an ancient way of life on the threshold of radical change. Young Mirelle longs to dedicate her life to running her aging father’s workshop, but her rabbi forbids her on account of her sex. Chafing against the constraints of both her gender and the suffocating strictures of the Ancona ghetto, Mirelle sees no way forward but dutiful marriage. Yet Napoleon’s armies, sweeping across Europe, threaten to change her way of life forever.”

—Mary Sharratt, author of Ecstasy and The Dark Lady’s Mask

Michelle Cameron is a director of the Writers Circle, an NJ-based organization that offers creative writing programs to kids and adults, and the author of works of historical fiction and poetry: The Fruit of Her Hands: The Story of Shira of Ashkenaz (Pocket, 2009), In the Shadow of the Globe (Lit Pot Press, 2003). She lived in Israel for fifteen years (including three weeks in a bomb shelter during the Yom Kippur War) and served as an officer in the Israeli army teaching air force cadets technical English. Michelle lives in New Jersey with her husband and has two grown sons of whom she is inordinately proud.
Loading...
or support indie stores by buying on