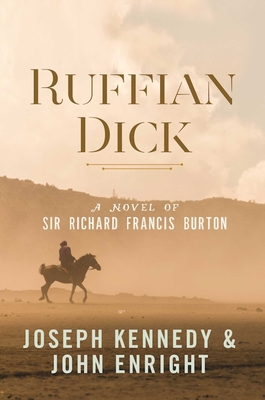 Lust and adventure meet history in this ride through roughshod America that rings truer than any history book.

Uncovered from the ashes of the British Consulate in Trieste, an archaeological excavation has found the once-thought destroyed and very private journal of Richard Burton, a man regarded as perhaps one of the greatest intellects, rogues, and colorful adventurers of the nineteenth century. In the journal’s pages a different man comes to light: here is Richard Burton unplugged and uncensored—the Renaissance man of his age fully revealed.

Presented as a transcription of the once-lost journal, Ruffian Dick follows the famous British adventurer into the true wilderness of American politics and the Wild West, all while the country is on the brink of the Civil War. Based on the historical fact that Burton actually did visit the United States in 1860, and traveled cross-country to study and write about the then-notorious polygamous Mormons in their stronghold at Salt Lake City, Joseph Kennedy’s Doctorow-esque mixture of fact and fiction takes the reader deep into that place and time.

With Kennedy’s research and eye for historic detail, Ruffian Dick (as Burton was known to his contemporaries) is an adventure tale that brings to light a side of the famed explorer never seen before.

Joseph Kennedy, recently deceased, was a professional archaeologist and writer living in Hawaii who had spent a great deal of time in both England and America researching the life of Sir Richard Burton. Kennedy is also the author of the books Coca Exotica, The Tropical Frontier, and The North Shore of O’ahu and was a regular contributor to Natural History magazine. In addition to many publications in professional journals, he had also written for Scientific American’s Discovering Archaeology, Mobius magazine, Pacifica, Archaeology, Perspectives in Biology and Medicine, and Hawaii Architectural Digest. He lived in Haleiwa, Hawaii.