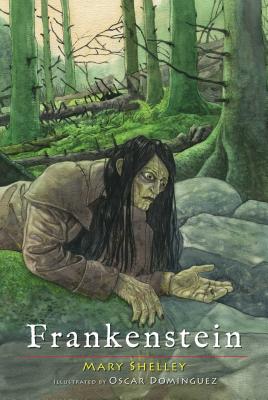 Frankenstein, or The Modern Prometheus, is often referred to as one the most important literary works of all time. Adapted and reprinted thousands of times, and often cited as the birth of the gothic novel and the science fiction genre, Frankenstein has captivated readers for centuries. This stunning edition is designed for a younger audience, complete with breathtaking illustrations and a more accessible, abridged text.

It is the haunting tale of Victor Frankenstein, a young scientist who creates cognizant, ghoulish being through a scientific experiment. On a dark, stormy night the creature is brought to life by being shocked with an electrical current harnessed from a lightning storm.

With its grim, but gripping narrative, Frankenstein is the classic story of life and death, humanity and monstrosity, and blurring the lines in between.

Mary Wollstonecraft Shelley was born in 1797 in London, England. She was the daughter of two eighteenth-century intellectual giants: political philosopher William Godwin and famed feminist writer Mary Wollstonecraft. Her magnum opus, Frankenstein, was conceived on a rainy night at Lake Geneva after a waking dream that she had a few nights after Lord Byron had proposed that they each write a ghost story. Suffering from a possible brain tumor, Shelley passed away in 1851.

Gina Gold has authored more than eighty children's books for Sesame Street, Disney, DreamWorks, Mattel, Warner Brothers, and other internationally-known franchises. She is also an Associated Press and Hearst Award-winning print journalist and a humor essayist whose work has been featured on NPR, in The Washington Post, and First Magazine for Women.

Oscar Dominguez is a Spanish illustrator who lives in Laredo, Spain.
or
Not Currently Available for Direct Purchase
Copyright © 2020 American Booksellers Association