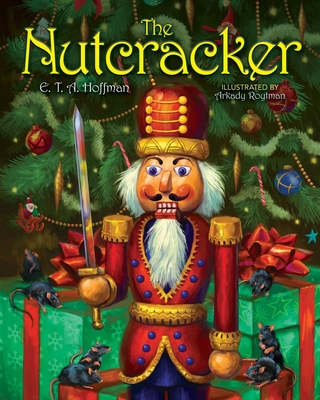 Publishing just in time for the forthcoming 2018 film adaptation, this edition of The Nutcracker is sure to enchant readers young and old.

On Christmas Eve, seven-year-old Marie and her eight-year-old brother Fritz anxiously await their Christmas gifts. When their godfather—a clock builder and toymaker—arrives, he unveils an ornate clockwork castle adorned with whirling figurines for the children. While Fritz plays with the clock, Marie is taken aside and given another gift—a nutcracker. After Fritz grabs the nutcracker from Marie and breaks its jaw by cracking too many nuts, their playtime ends and they head off to bed. When the clock strikes twelve, magic makes its way into this enduring tale and an epic battle ensues.

This timeless classic, featuring all-new full-color and black-and-white illustrations by artist Arkady Roytman and abridged text by Gina Gold, is the perfect story to get anyone in the holiday spirit!

E. T. A. Hoffman wore many hats, among them are those of a playwright, composer, music critic, and more. He wrote this novella, originally titled The Nutcracker and the Mouse King, in 1816, and it is among his most notable works. Hoffman’s influence played a crucial role in the Romantic literary movement in the nineteenth century, and his works have been heavily adapted and analyzed by the likes of notables such as Pyotr Ilyich Tchaikovsky, Robert Schumann, and Sigmund Freud. Hoffman passed away at the age of forty-six in 1822.

Arkady Roytman graduated with honors from the Savannah College of Art and Design. His science fiction, fantasy, and children’s book illustrations have appeared in numerous magazines and galleries across the country, and he is the author/illustrator of more than twenty books. He resides in Amman, Jordan.
or
Buy Here
(This book is on backorder)
Copyright © 2020 American Booksellers Association