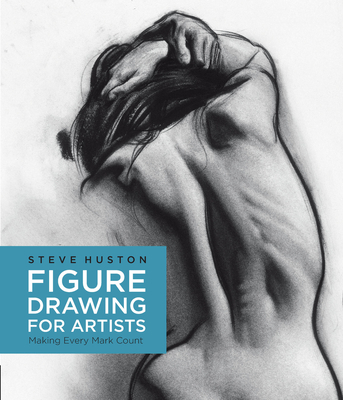 Figure Drawing for Artists: Making Every Mark Count is not a typical drawing instruction book; it explains the two-step process behind juggernauts like DreamWorks, WB and Disney.

Though there are many books on drawing the human figure, none teach how to draw a figure from the first few marks of the quick sketch to the last virtuosic stroke of the finished masterpiece, let alone through a convincing, easy-to-understand method.

In Figure Drawing for Artists: Making Every Mark Count, award-winning fine artist Steve Huston shows beginners and pros alike the two foundational concepts behind the greatest masterpieces in art and how to use them as the basis for their own success.

Embark on a drawing journey and discover how these twin pillars of support are behind everything from the Venus De Milo, to Michelangelo's Sibyl, to George Bellow's Stag at Sharkey's, and how they're the fundamental tools for animation studios around the world. Not to mention how the best comic book artists since the beginnings of the art form use them whether they know it or not.

Figure Drawing for Artists: Making Every Mark Count sketches out the same two-step method taught to the artists of DreamWorks, Warner Brothers, and Disney Animation, so pick up a pencil and get drawing.

The For Artists series expertly guides and instructs artists at all skill levels who want to develop their classical drawing and painting skills and create realistic and representational art.


Praise For Figure Drawing for Artists: Making Every Mark Count…

"Finally a book that emphasises gesture and rhythm first and foremost. I think the book is weighted just right for making it clear to the current photo copyist culture, and the overly medicalized anatomy culture, that gesture, rhythm, and playful, designed proportion are by far the most important initial visual ideas. Not only for the figure, but for entire images." - Erik Olsen, faculty at College of Creative Studies, Detroit

"Steve Huston's new instruction book, FIGURE DRAWING FOR ARTISTS, has been long over due and something I have personally waited for. A consummate draftsman, brilliant painter and one of the most knowledgeable artist I have ever had the pleasure of knowing has made this valuable book available for anyone who is truly interested in understanding the principals of drawing. This book will be the yardstick that all other instructional drawing books are measured by." - Dan McCaw, Fine Artist

"Steve Huston is a living master, and one of the few who can teach as well as he paints. He's both a mentor and an inspiration to a new generation of professional artists around the world." - Joshua Jacobo, Cofounder and CEO,New Masters Academy€‹

"Steve Huston is one of the most uniquely powerful artists out there . . . a modern master. [Figure Drawing for Artists] is a phenomenal resource. Steve's insight and love for what he does inspires. This book should be in every student's library. That being said, it's for every artist - students and professionals alike." - Carlos Huante, Art Director, Industrial Light & Magic, a division of Lucasfilm

"an authoritative and useful book with a range of expert tips, pointers and advice that will help your figure drawing"  - Paint & Draw

Steve Huston was born and raised in Alaska. He studied at Pasadena's Art Center College of Design. Graduating with his BFA, Huston began illustrating. His client list eventually included such names as Caesar's Palace, MGM, Paramount Pictures and Universal Studios. After nearly a decade of doing commercial work, Huston decided a change was in order. He's developed his unique teaching method over 30 years, teaching drawing, painting and composition- first at his Alma Mater, then at the Disney, Warner Brother, Dreamworks, and most other major studios.

Influences include among others Titian, Michelangelo, Rembrandt, the early American Tonalists, the homespun character of the WPA art projects, and the heroic and graphic inventions of the American Comic Book form.

Since then, Steve has shown his fine art pieces around the world. He's the only artist in the history of the California Art Club to win their gold medal three times. His work has been featured in Art News, American Art Collector, Harper's Magazine, Southwest Art, American Artist, Western Art & Architecture, Playboy, and many others.