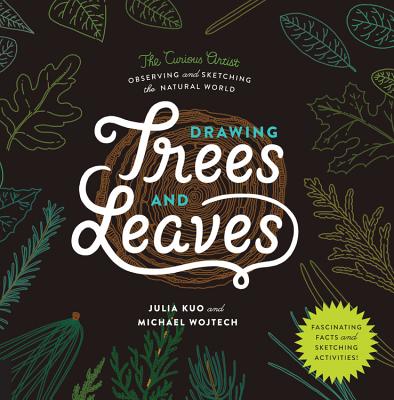 Observing and Sketching the Natural World (The Curious Artist)

Capture the essence of the forest with Drawing Trees and Leaves.

Trees are a perennially inspiring subject for artists. Think of their beautiful multicolored leaves in the fall, or the way the snow settles on their branches in the winter. Start by learning how to identify trees and leaves, their benefit and life stages, the oldest trees, famous forests, and other fascinating aspects and phases of growth. Then, use this inspiration paired with charming prompts to draw the diverse beauty of these endlessly captivating and beautiful subjects.

Flip this book open vertically; these are drawings of tall trees!

Julia Kuo grew up in Los Angeles and studied illustration and marketing at Washington University in St. Louis, where she has also taught illustration. (Most of this book was completed right by the lovely Forest Park in St. Louis.) Julia currently lives in and works out of Chicago for most of the year and Taiwan in the winter. She illustrates children's books as well as editorial pieces for newspapers and magazines. Her clients include ScienceFriday.com, the New York Times, Hachette Books, Simon & Schuster, and Macmillan Publishers. Her illustrations have been honored in American Illustration, CMYK magazine, and Creative Quarterly. When she's not drawing, you might find her running around in a national park and looking at moss. See more of her work at www.juliakuo.com

Naturalist Michael Wojtech earned his master's in Conservation Biology from Antioch University New England. His thesis became the foundation for his book Bark: A Field Guide to Trees of the Northeast (University Press of New England, 2011). A freelance writer, educator, photographer, and illustrator, Michael's work has appeared in American Forests, Northern Woodlands, and other publications. He presents lectures and workshops on the identifying characteristics, ecology, and beauty of trees for arboretums, schools, nature centers, museums, garden clubs, libraries, and other organizations, including the Arnold Arboretum, the Peabody Museum at Yale, and the Torrey Botanical Society.

Michael strives to share the process of discovery - the keen observation, finding nuance and beauty in infinite layers, the evocation of multiple senses - and inspire the creative expressions and connections that flow from these experiences. He and his two daughters live in Williamsburg, Massachusetts, and regularly explore the forests of western Massachusetts. Learn more about Michael's work at www.knowyourtrees.com