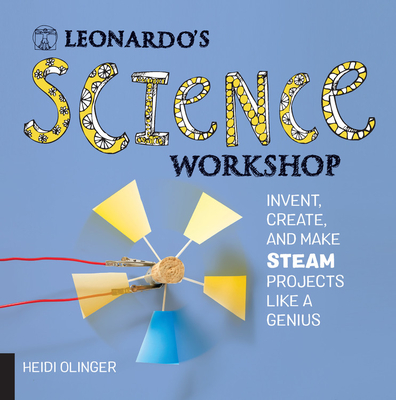 
More than 500 years ago, Leonardo knew that the fields of science, technology, engineering, art, and mathematics (STEAM) are all connected. The insatiably curious Leonardo examined not just the outer appearance of his art subjects, but the science that explained them. He began his studies as a painter, but his curiosity, diligence, and genius made him also a master sculptor, architect, designer, scientist, engineer, and inventor. The Leonardo’s Workshop series shares this spirit of multidisciplinary inquiry with children through accessible, engaging explanations and hands-on learning.

This fascinating book harnesses children’s innate curiosity to explore some of Leonardo’s favorite subjects, including flight, motion, technology design, perspective, and astronomy. After each topic is explained with concepts from physics, chemistry, math, and engineering, kids can experience the principles first-hand with step-by-step STEAM projects. They will explore:Insight from other great thinkers—such as Galileo Galilei, James Clerk Maxwell, and Sir Isaac Newton—are woven into the lessons throughout.

Heidi A. Olinger is the founder and chief executive officer of Pretty Brainy and serves as president of the Board of Directors. Heidi launched Pretty Brainy in 2008 with the goal of designing innovative learning that respects girls’ genuine interests and evaluation of science, technology, and math. Pretty Brainy received its first funding to develop STEAM-inspired apparel for girls, which in 2009 won the highest honor from the Mom’s Choice Awards®. In 2010, Heidi led a pilot workshop in The STEM of Fashion Design™ that resulted in Pretty Brainy fully pivoting in the direction of designing and delivering experiential learning steeped in real-world implications and outcomes. Consistent with this new direction, in 2013 Pretty Brainy became a 501(c)(3) nonprofit organization with the mission of Empowering Girls to Gain STEAM.