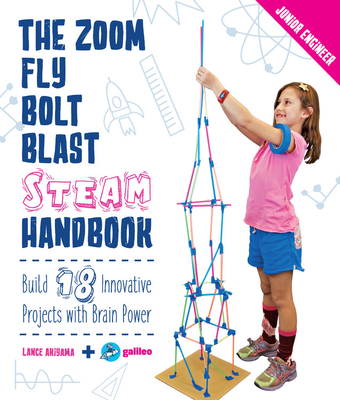 Make an automaton, a pneumatic machine, a suspension bridge, a flexible hand, a crash-test car, even a (working) vacuum cleaner! The Zoom, Fly, Bolt, Blast STEAM Handbook gives parents and kids ages 6 to 10 a selection of 18 engaging projects to build together. And when they're finished, they'll have personalized creations that fly, race, and blast off!

Each project includes clear and simple instruction, materials lists featuring items that can be found at most common craft or hardware stores, as well as an introduction to the design thinking process. Readers are encouraged to improve an existing design, troubleshoot things that aren't working, and add their own creative touches.

This project book is the latest title by Rockport's creative-engineering rockstar, Lance Akiyama, (who you may remember from Rubber Band Engineer, Duct Tape Engineer, and Launchers, Lobbers, and Rockets Engineer) and was made in cooperation with Galileo Learning.

Galileo Learning operates over 70 innovation camps in Chicagoland and California, where Lance proudly works as a curriculum developer. Galileo's curriculum is rigorously developed by a small team of project-based learning experts, including former classroom teachers, Stanford University grads, entrepreneurs, artists, and makers. Each project idea is created to support Galileo's mission of developing innovators who envision and create a better world.

Lance Akiyama is the author of four books in Rockport's Engineer series: Rubber Band Engineer; Duct Tape Engineer; Launchers, Lobbers, and Rockets Engineer; and The Zoom, Fly, Bolt, Blast STEAM Handbook. Lance is the Science Curriculum Manager for Galileo Learning (STEAM camps for Pre-K to 8th grade), for which he designs STEAM-based lessons and projects for K–8 students. He has been developing hands-on engineering projects for kids since 2011 and working in education since 2006. He lives in the San Francisco Bay area.