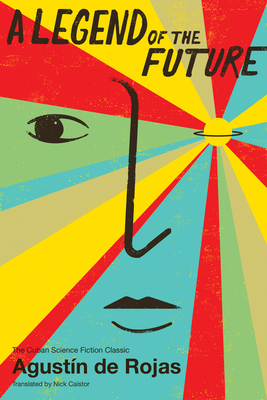 A Legend of the Future

“Finally, we have the chance to read a landmark work from one of Cuba’s greatest science fiction writers…. If you like intensely psychological sci-fi that deftly piles on the suspense, this novel’s for you…. The boundaries between dream and reality, and then between human and machine, almost melt away as the story progresses. And it is de Rojas’s skillful manipulation of those boundaries that makes A Legend of the Future so addictive.”  —SF Signal

The first book by the father of Cuban science fiction to be translated into English, this mesmerizing novel, reminiscent of Arthur C. Clarke’s 2001: A Space Odyssey, is a science-fiction survival story that captures the intense pressures—economic, ideological, and psychological—inside Communist Cuba.

A Legend of the Future takes place inside a spaceship on a groundbreaking mission to Titan, one of Saturn’s moons; back home, a final conflict between warring superpowers threatens the fate of the Earth. When disaster strikes the ship, the crewmembers are forced into a grand experiment in psychological and emotional conditioning, in which they face not just their innermost fears, but the ultimate sacrifice—their very humanity.

Praise For A Legend of the Future…

"The best and most popular novelist of this genre that the Island has ever given…. He is considered one of the principal exponents of Cuban science fiction, and  he was undoubtedly the one who knew how to best combine solid scientific formation as plots and attractive characters with a confidence well-based in humanity’s socialist future.”

“Finally, we have the chance to read a landmark work from one of Cuba’s greatest science fiction writers….  Steady build-up of suspense, believable depiction of characters under intense stress, unique take on human space exploration…. If you like intensely psychological sci-fi that deftly piles on the suspense, this novel’s for you…. Agustín de Rojas authored a trilogy that pushes the boundaries of our imaginations…. You’ll want to prepare yourself for Legend. It’s been compared to Clarke’s 2001, and like that remarkable text, de Rojas’s will blow your mind in a good way…. The boundaries between dream and reality, and then between human and machine, almost melt away as the story progresses. And it is de Rojas’s skillful manipulation of those boundaries that makes Legend so addictive.”

“This is the first English translation of a novel by de Rojas (1949-2011), considered the father of Cuban science fiction. Influenced by Ray Bradbury and Isaac Asimov A Legend of the Future tells the tale of a space mission to Titan, a moon of Saturn, during a potentially apocalyptic war between superpowers back on Earth. Along the way, the spaceship's crew is drawn into an experiment of reconditioning that may remind some readers of the ideological indoctrination reinforced to this day in Castro's Cuba.”

“On the surface it's a very focused exploration of how three people could survive such a situation and the lengths they might have to go to. How people adapt when circumstances spiral out of control — and how they crack when they don't adapt sufficiently. Dig a bit deeper, though, and it is also a lesson on how ideals and beliefs can be eroded given certain influences and when they do deterioration is inevitable and unavoidable. The tightly written prose manages to firmly grasp the reader, the pace is steady and the quality of the writing superb. It's unforgiving and demanding but also worth the effort. I loved this brief glimpse of science fiction from a mindset free of western constraints. A Legend of the Future is a remarkable glimpse not only into a vision of the future but more importantly into a culture very different from western capitalism. It's also a stark reminder about some of the more serious problems that a country in the stranglehold of a communistic country face. A worthy addition to anyone's science fiction collection.”

"At last, they are finally publishing science fiction from Cuba.... Let me assure you, it is a pity that it took so long!... What really sells this story is not the situation (which is terribly reminiscent of 2001 and Tau Zero), but the psychological focus on the characters.... I came to admire Rojas’ lesson conducted with the crew of the Sviatagor: namely, how the limits of individual humanity can only be surpassed through cooperation and dependency upon our fellow man—sometimes at great personal sacrifice. If A Legend of the Future is idealistic science fiction, colored by the politics of its age, then it is idealistic science fiction at its best—concerned with the fate of mankind among the stars and not with spaceships and gadgets and alien races. I remain curious as to what else Cuban science fiction has in store for its new, English-speaking audience. For those of you who are also curious, start with A Legend of the Future."

“Philosophically dense and hallucinatory in the manner of later Philip K. Dick.… Legend works as both suspenseful survival sci-fi (much like the current Matt Damon film The Martian) and a philosophical reflection of what it means to be human.… A strong blend of hard science and psychological fiction, A Legend of the Future should prove engrossing for admirers of Philip Dick or Stanislaw Lem.”

“Reading through [A Legend of the Future], I had was reminded of books like Solaris, and interestingly, of Jeff Vandermeer’s Annihilation.”

“A subdued psychological drama enhanced by speculative elements about human psychology (fans of Joss Whedon’s TV show Dollhouse will find a couple of points of resonance) topped off with an overwhelming awareness of mortality.… It’s a novel that, together with A Planet for Rent, shows the dizzying range of fantastical situations that can emerge from a ground-level view of ideological conflict’s aftereffects.”

“Throughout [A Legend of the Future], cohesively worked into the narrative as part of the conditioning, as memories vividly relived as like hallucinations, reveal just how tightly-knit this crew was, still is, and the philosophy and indoctrination that created that. The characters are put in situations, through changes, only possible in SF, but the psychological exploration of death, desires, thoughts, and values among deeply emotional-connected people struggling to find a way to survive catastrophe is relatable and human. It’s a fantastic book, well-plotted and paced, that plays with some traditional SF rules and gambits, while ever-exciting in the new avenues it creates.”

Nick Caistor is a British journalist, non-fiction author, and translator of Spanish and Portuguese literature. He has translated Cesar Aira, Paulo Coelho, Eduardo Mendoza, Juan Marsé, and Manuel Vázquez Montalban, and he has twice won the Valle-Inclán Prize for translation. He regularly contributes to Radio 4, the BBC World Service, the Times Literary Supplement, and the Guardian. He lives in Norwich, England.
Loading...
or support indie stores by buying on