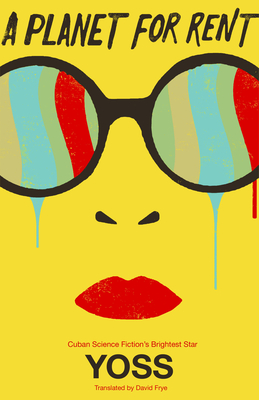 A Planet for Rent

“A Planet for Rent is the English-language debut of Yoss, one of Cuba's most lauded writers of science fiction. Translated by David Frye, these linked stories craft a picture of a dystopian future: Aliens called xenoids have invaded planet Earth, and people are looking to flee the economically and socially bankrupt remains of human civilization. Yoss' smart and entertaining novel tackles themes like prostitution, immigration and political corruption. Ultimately, it serves as an empathetic yet impassioned metaphor for modern-day Cuba, where the struggle for power has complicated every facet of society” —NPR, Best Books of 2015

Out of the modern-day dystopia of Cuba comes an instant classic from the island’s most celebrated science fiction author: a raucous tale of a future in which a failing Earth is at the mercy of powerful capitalist alien colonizers.

In A Planet for Rent, Yoss critiques life under Castro in the ‘90s by drawing parallels with a possible Earth of the not-so-distant future. Wracked by economic and environmental problems, the desperate planet is rescued, for better or worse, by alien colonizers, who remake the planet as a tourist destination. Ruled over by a brutal interstellar bureaucracy, dispossessed humans seek better lives via the few routes available—working for the colonial police; eking out a living as black marketeers, drug dealers, or artists; prostituting themselves to exploitative extraterrestrial visitors—or they face the cold void of space in rickety illegal ships.

This inventive book marks the English-language debut of an astonishingly brave and imaginative Latin American voice.

Praise For A Planet for Rent…

"A Planet for Rent is the English-language debut of Yoss, one of Cuba's most lauded writers of science fiction. Translated by David Frye, these linked stories craft a picture of a dystopian future: Aliens called xenoids have invaded planet Earth, and people are looking to flee the economically and socially bankrupt remains of human civilization. Yoss' smart and entertaining novel tackles themes like prostitution, immigration and political corruption. Ultimately, it serves as an empathetic yet impassioned metaphor for modern-day Cuba, where the struggle for power has complicated every facet of society."

"In prose that is direct, sarcastic, sexual and often violent, A Planet for Rent criticizes Cuban reality in thinly veiled terms. Cuban defectors leave the country not on rafts but on 'unlawful space launches'; prostitutes are 'social workers'; foreigners are 'xenoids'; and Cuba is a “planet whose inhabitants have stopped believing in the future.” The book is particularly critical of the government-run tourism industry of the ’90s, which welcomed and protected tourists — often at the expense of Cubans — and whose legacy can still be felt today."

“Some of the best sci-fi written anywhere since the 1970s.… A Planet for Rent, like its author, a bandana-wearing, muscly roquero, is completely sui generis: riotously funny, scathing, perceptive, and yet also heart-wrenchingly compassionate.… Instantly appealing.”

"This hilarious and imaginative novel by Cuba's premiere science-fiction writer gets my vote for most overlooked novel of the year. Yoss's book imagines a world where Earth is run as a tourist destination by capitalist aliens who have little regard for the planet or its inhabitants. A Planet for Rent is a perfect SF satire for our era of massive inequality and seemingly unchecked environmental destruction."

"A Planet for Rent is devastating and hilarious and somehow, amidst all those aliens, deeply deeply human."

“A compelling meditation on modern imperialism…. A fascinating kaleidoscope of vignettes…. A brilliant exploration of our planet’s current social and economic inequities…. Yoss doesn’t disappoint, sling-shotting us around the world and the galaxy…. Striking, detailed.… Yoss has written a work of science fiction that speaks to fundamental problems humans deal with every day. This is not just a story about alien oppression; it’s the story of our own planet’s history and a call for change.”

“What 1984 did for surveillance, and Fahrenheit 451 did for censorship, A Planet for Rent does for tourism.… It’s a wildly imaginative book and one that, while set in the future, has plenty of relevance to the present.”

"The human characters' palpable desperation and the impossibility of their circumstances become increasingly moving, and some stories, such as the blistering 'Performing Death' and its protagonist's excruciating, literally suicidal performance art, provide a wrenching depiction of the corrosive effects of prejudice and colonialism."

"I chose to read it solely based on the author photo [and thought,] 'If this book is half as cool as the author, it is going to be fantastic!' And this book is indeed fantastic! His name is Yoss, it’s one name like Madonna, or Prince, he’s that cool.... He is widely considered to be the most important science fiction writer in Cuba, and there is no mistaking why.... This book is completely wacky, as it sounds, and highly original. I really, really enjoyed it. It tells some really ugly truths about humanity in a really grim and humorous way.... It’s pretty bleak, but awesome, and it’s really funny."

"Yoss (born Jose Miguel Sanchez Gomez) clearly means his book to be taken as a metaphor for contemporary Cuba, but you don’t need to focus over much on the allegorical aspects to enjoy this dystopian work. At times, I was reminded of John Brunner’s classic cautionary s-f work Stand on Zanzibar, in the way it combines its socially sharp and inventive commentary with characters that we care about. His discussion of alien class distinctions prove particularly acute, as one might expect it to be, and he shows a surprisingly empathetic eye toward even the most grotesque creatures.... Not a book for the faint-hearted (it contains some calculatedly disturbing, very adult scenes, particularly in “Performing Death”), Yoss’ English language debut provides a challenging taste of contemporary Cuban literature."

“For readers of Stanislaw Lem and William Gibson's Sprawl trilogy.... An excellently written piece of sci-fi, with its rich world-building and well-crafted characters.... Yoss has told a fictional tale that rings all too true despite the aliens and spaceships. A Planet for Rent is science fiction of the highest caliber. It tells us to imagine a strange new world, and as we explore it we come to understand our own a little better."

"Can one Cuban author boldly go where none have gone before and inspire American readers? Heavy metal rocker turned science fiction writer José Miguel Sánchez (known for his pen name, Yoss) believes he can.... Science fiction fans… will be interested in the way Yoss addresses important questions about the future: Who are we? What does it matter to be human? And, what is our place in the universe?... Yoss's novel is part of an international literary canon of science fiction classics that makes invisible walls visible by showing everyday readers how inequality segregates people by class, politics or ethnicity."

“[Yoss’s] work is modern, dynamic and yet deep and thoughtful.… There is a dark, almost bleak tone to the novel but with small sparks of hope, along with a good deal of dark humour.… It's wildly inventive, imaginative fiction, with a real edge to the writing — there is an energy to the prose that is almost tangible and to get all this through a translation is nothing short of remarkable.”

“The true power of science fiction lies in its capacity to convey the reality of human existence, and the threats we face from internal and external sources, while using language, images, and concepts that transcend common experience. This could not be truer of A Planet for Rent by Cuban science fiction legend José Miguel Sánchez, better known as Yoss.… Highly relevant. Joining a literary tradition of writers who envisioned Earth’s future in terrifyingly comprehensible ways, such as H.G. Wells, Arthur C. Clarke, J.G. Ballard, Philip K. Dick, Aldous Huxley, and Margaret Atwood, Yoss’s portrayal of Earth’s dystopian downfall weaves together fantasy and reality—at times troublingly close to the latter.… Yoss skilfully weaves themes and characters together into a rich tapestry, and each section gives us a more fulfilling, and fearful, vision of a dominated Earth–now an intergalactic tourist destination.”

When he isn’t translating, David Frye teaches Latin American culture and society at the University of Michigan. Translations include First New Chronicle and Good Government by Guaman Poma de Ayala (Peru, 1615); The Mangy Parrot by José Joaquín Fernandez de Lizardi (Mexico, 1816), for which he received a National Endowment for the Arts Fellowship; Writing Across Cultures: Narrative Transculturation in Latin America by Ángel Rama (Uruguay, 1982); and several Cuban and Spanish novels and poems.
Loading...
or support indie stores by buying on