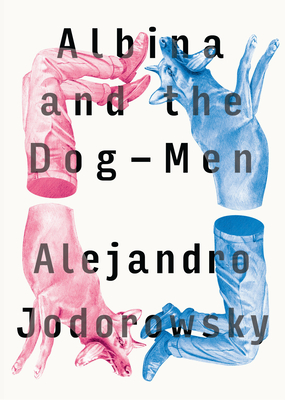 Albina and the Dog-Men

“Deeply psychological and mysterious, the book will stimulate the imagination of the reader's mind to the extreme.” —Marina Abramovic

“In his latest novel, Jodorowsky builds on his multi-decade long assault of the public imagination…. a fantastical and genre-defying parable of love and friendship…. At its core, Albina and the Dog-Men is a love story about two people committed to one another's survival and to discovering their potential. And, as with life, it is sometimes only through the weathering of a storm that our true capacities are made clear.” —NPR Books

Albina and the Dog-Men is Alejandro Jodorowsky’s darkly funny, shocking, and surreal hybrid of mystical folktale, road novel, horror story, and social parable, ultimately uniting in a universal story of love against the odds and what makes us human.

Praise For Albina and the Dog-Men…

"Deeply psychological and mysterious, the book will stimulate the imagination of the reader's mind to the extreme.”

“In his latest novel, Jodorowsky builds on his multi-decade long assault of the public imagination…. a fantastical and genre-defying parable of love and friendship…. Throughout this dark dream of a novel, Jodorowsky's writing is comic and occasionally mesmerizing. It is also ripe with horror and philosophical questions about what it means to belong, everywhere and nowhere. And while some of the subject matter is disturbing, it often carries the air of something ancient that you read children by a fire. For years Jodorowsky has proven the intensity of his imagination, and how far he is willing to go to present his singular vision to the world. He is a fully realized artist whose tales demand attention. At its core, Albina and the Dog-Men is a love story about two people committed to one another's survival and to discovering their potential. And, as with life, it is sometimes only through the weathering of a storm that our true capacities are made clear.”

“Composed like a feverish fairytale, Albina and the Dog-Men is a South American parable of self-acceptance and belonging that is fueled by prurience and colored with vivid, hallucinogenic details.… No moment of Jodorowsky’s book is at all predictable or familiar, and those who have a taste for the uncanny will be in awe over its undulations into strange, even godly, territory. The sensuality of the prose thickens as Albina’s situation becomes more tenuous, resulting in heady and appealing constructions.… As Albina and her followers traipse over barren lands and into forests protected by ancient Incans, the novel winds toward territory both magical and needfully human. The surreal methods of redemption in the novel’s final pages prove both glorious and moving. Jodorowsky’s is a work of unforgettable weirdness, a work whose movements are directed by sometimes violent mysticism and whose final lessons may speak to all who have ever dreamed of transformation.”

“An imaginative mythology from the incomparable Alejandro Jodorowsky… Like Alejandro Jodorowsky himself, Albina and the Dog-Men seems to be all imaginable things at once.… The language is instantly visual, and Alfred MacAdam’s deft translation is whimsical and fantastic without drifting into adolescence. Albina and the Dog-Men is the product of an unfathomable, affecting imagination.”

“To read Alejandro Jodorowsky’s Albina and the Dogmen is to careen through a surreal landscape on a mythic roller coaster…. [Jodorowsky] deftly pairs the beautiful and the strange, the ugly and the lovely, the bodily hideous and the purified holy. His prose is poetic.... His precision is captivating. A translated work can sometimes suffer from dryness, but Alfred MacAdam has done a masterful job preserving Jodorowsky’s insane clip.... It’s fantastic.... Crude and clever, beautiful and weird, read Jodorowsky if you want to feel like you’ve run a marathon through a fever dream."

“Is there a more thrillingly warped visionary artist working today than Alejandro Jodorowsky? ….Featuring a dwarf, an irascible woman, Incan iconography, and a search for a magical elixir hundreds of years in the making, the plot is pure Jodorowsky. It is psychedelic and weird in the best possible way — where else could you find a werewolf-type plot that manages to be a deep examination of desire and spirituality?... Jodorowsky’s madcap fantasy novel … [shows] that despite featuring talking parrots, albino strippers, and giant hares, Albina and the Dog-Men actually has a lot to say about things like hope, depression, and the power of love.”

“Alejandro Jodorowsky needs no introduction.… [Albina and the Dog-Men is] characteristically indescribable.… Freedom from limitations is something I really appreciate in [Jodorowsky’s] work. Most writers distinguish between genres, moods, and tones, but [he] puts it all together and pushes it out there.… Albina contains thousands of ideas, or at least hundreds of ideas. On every page, there’s a new idea, and then another.”

Alejandro Jodorowsky was born to Ukrainian Jewish immigrants in Tocopilla, Chile. From an early age, he became interested in mime and theater; at the age of 23, he left for Paris to pursue the arts, and has lived there ever since. A friend and companion of Fernando Arrabal and Roland Topor, he founded the Panic movement and has directed several classic films of this style, including The Holy Mountain, El Topo and Santa Sangre. A mime artist, specialist in the art of tarot, and prolific author, he has written novels, poetry, short stories, essays, and over thirty successful comic books, working with such highly regarded comic book artists as Moebius and Bess. Restless Books will be publishing three of Jodorowsky's best-known books for the first time in English: Donde mejor canta un pájaro (Where the Bird Sings Best), El niño del jueves negro (The Son of Black Thursday), and Albina y los hombres perro (Albina and the Dog Men).

Alfred MacAdam is professor of Latin American literature at Barnard College-Columbia University. He has translated works by Carlos Fuentes, Mario Vargas Llosa, Juan Carlos Onetti, José Donoso, and Jorge Volpi among others. He recently published an essay on the Portuguese poet Fernando Pessoa included in the Cambridge Companion to Autobiography.
Loading...
or support indie stores by buying on