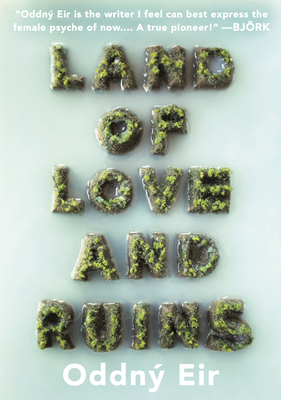 Land of Love and Ruins (Paperback)

“Oddný Eir is an authentic author, philosopher and mystic. She weaves together diaries and fiction. She is the writer I feel can best express the female psyche of now and has bridged the gap between rural Iceland and Western philosophy. A true pioneer!!!!!!!!” —Björk

The winner of the EU Prize for Literature, Land of Love and Ruins introduces a daring new voice in international fiction: Oddný Eir. In the wake of Iceland’s financial crisis, a young author, recently separated and feeling out the uncertain terrain of a new relationship, finds herself questioning the foundations of our love and family lives, our bonds to country and the earth. Stirred by a dream about an old Viking woman on a pilgrimage, she sets out on a quest to the the ruins of the homes of her ancestors, where they tried to live in harmony with nature and each other. Her guiding questions are as essential as their answers are elusive: How do we create a home for love? How can we nourish personal space while sustaining intimacy and desire with a partner? How can we go, not back, but forward to nature?

Drawn both to her archaeologist brother and her ornithologist lover, she explores alternate forms that those relationships might take. Her search brings her all over Iceland and abroad to Paris, Strasbourg, Basel, and the Lake District home of famous Romantic siblings Dorothy and William Wordsworth. Written in the form of a diary that pans from small details to big questions and weaves elements of philosophy, history, archaeology, ecology, eroticism, and literature into a beautifully patterned whole, Oddný Eir invents a new, intimate language between writer and reader in this enchanting book about being human in the modern world.

Oddný Eir (1972) is an Icelandic author whose novel Land of Love and Ruins won the EU Prize for Literature and the Icelandic Women’s Literature Prize. In addition to publishing four novels and several books of poetry and essays, she has worked in the art world as a lecturer and gallerist, has received a grant to study archives and museums in Iceland, has been an environmental activist, and has collaborated with the musical artist Björk in composing lyrics for her albums Biophilia and Vulnicura. She has received advanced degrees in political philosophy from the University of Iceland and The Sorbonne. Oddný Eir lives in the Icelandic countryside, by the glacier Eyjafjallajökull.

Philip Roughton is an award-winning translator of Icelandic literature, currently residing in Reykjavík. He earned a PhD in Comparative Literature from the University of Colorado, Boulder, with specialties in medieval Icelandic, medieval Chinese, and Latin literature, and wrote his dissertation on medieval Icelandic translations of saints’ and apostles’ lives. He has taught modern and world literature at CU-Boulder, and medieval literature at the University of Iceland. His translations include works by many of Iceland’s best-known writers, including the Nobel laureate Halldór Laxness, Jón Kalman Stefánsson, Bergsveinn Birgisson, Steinunn Sigurðardóttir, and others. He was recently awarded the 2015 American-Scandinavian Foundation Translation Competition Prize, for his translation of Halldór Laxness’ novel Gerpla (Wayward Heroes).

Praise For Land of Love and Ruins…

“Peripatetic and reflective, bookish and quietly beguiling, the narrator of Land of Love and Ruins has clear antecedents in the W.G. Sebald of The Rings of Saturn and Teju Cole’s Julius in Open City. If her solitude is less reticent, less chastened than theirs, this is likely because she has not been driven by oblique trauma to protective self-erasure. She seeks connection with others and is honest about her desires, even as she worries about the emotional and intellectual costs of compromising her autonomy in order to fulfill them. . . . In this way, Land of Love and Ruins is less an extension of Sebald’s line than of recent path-breaking, genre-porous narratives such as Eileen Myles’ Inferno, Jenny Offill’s Dept. of Speculation, Maggie Nelson’s The Argonauts and  Lynne Tillman’s Someday This Will Be Funny. . . . Questions about what makes a family, what constitutes a partnership, and how the need to love and be loved conflicts with the need to be your own person, become questions about what makes a country, what constitutes sustainability, and what happens when growth and consumption exceed the limits of what the earth can bear. . . . Land of Love and Ruins is an extraordinary novel. I can’t remember the last time I read a book at once so understated yet unrestrained.”

“Oddný Eir is an authentic author, philosopher, and mystic. She weaves together diaries and fiction. She is the writer I feel can best express the female psyche of now . . . A true pioneer!!!!!!!!”

“Winner of the EU Prize for Literature, this meditative novel by Icelandic shooting star Eir (she’s collaborated with Björk) features a nameless young narrator home again after a break up and launching a spiritual quest. She seeks peace and solitude in nature, visiting Iceland’s meadows and lava fields with a tentative new ornithologist boyfriend who for a time goes to live in a cave. But she’s also deeply sociable, sharing many homey moments with family, particularly her archaeologist brother, and traveling to Basel, Paris, and more in search of sustaining interactions with art and artists. In fact, the narrator herself is a writer deeply imbued with Iceland’s language and literary traditions. Without ever sounding like a screed, the book considers how we manage intimacy and live in a world rife with social and economic injustice. VERDICT: Reading this lyrically, sometimes even deliciously written work is almost as good as going on one’s own spiritual quest; it will have great appeal to any reader beyond thrill-seeking, shoot-’em-up fans.”

"[In Land of Love and Ruins] passages sometimes verge on the poetic, and a beautiful, satisfying insight can often be its own reward, no matter what it contributes to the broader narrative . . . Land of Love and Ruin is a rewarding, if deeply reflexive little book. It pokes and prods at philosophy and sociology, but never excessively, always couching them in a framework of feeling and everyday life. The diary mode is again a useful vehicle for bringing together such varied directions: the narrator’s musings range from Icelandic sagas to Greek mythology; from Confucianism to Hannah Arendt . . . Land of Love and Ruins is a meditation on the present condition, on how our fragmented emotional selves correspond to our fragmented economies, on how progressive-minded, socialist and feminist selves can still find solace in old traditions and familial histories . . . There are no conclusions to be found in such a work, which borders the poetic and prose, memory and fiction. The pleasure here is to be found in the journey."

“A writer ponders the sustainability of both her relationships and the environment in this autobiographical novel-in-diary-entries . . . her chief concerns in this book are love, nature, and history, which she explores during her hiking and camping trips through Iceland as well as during brief detours to England and France. She goes bird-watching on a beach; ponders settling down and having kids in Reykjavik; visits ancient settlements, gravesites, and museums; explores the profundity of Snoop Dogg's lyrics; and generally contemplates the meaning of home. ("A place of experimentation and discovery . . . where the most natural in each individual can be developed.") At her best, these ramblings suggest a modern-day Walden, in which a writer communes with the environment to better contemplate the complexities of being . . . there's something admirably consistent about her vision of stewardship—of life, of relationships, of land . . . When she writes about the charm and beauty of the places she visits, you want to pitch a tent right alongside her . . . [A] graceful vision of a slower, more emotionally in-touch way of life.”

"If you love the kind of novel that lets you wander with a fascinating mind for a while, this is your pick. Icelandic author Oddný Eir gives us the eponymous Oddný, an emerging novelist who's recently separated from a lover and is recording her thoughts piecemeal as she ambles through a new relationship and across countries. Part diary, part philosophy (think Pascal and Montaigne), always keen and true and delightfully smart, this is a book that I related to deeply and loved consuming in in small bites. Fans of Nell Zink's The Wallcreeper and perambulating literary memoirs like Patti Smith's M Train should give it a look.”

“Somewhere within a constellation that contains Ben Lerner and Terry Tempest Williams, there shines Oddný Eir: poet, environmentalist, Bjork collaborator . . . Starting from a lovely story of finding a place for independence in a new romance, she creates something like an epic hymn to sustainability that winds its way back through an ancestral Icelandic past and forward into the uncertainty of global change. Every essayistic tangent in these collected diary entries—whose endless succession of memorial days includes Cream-Puff Day and the Feast of Psychoanalysis—folds itself back into the exceptionally tender core, which is all the more tender for being so fiery with passion.”

“It stands to good reason that the protagonist of Eir’s debut novel would idolize a legendary Icelandic heroine, Gudrun Osvifursdottir. Local lore has it that when Gudrun, who may or may not have been a real person, was asked about the men in her life, she famously replied, 'To him I was worst whom I loved best.' The unnamed narrator of this tale in journal entries suggests that the same statement could be made about the way the Icelandic people treat their motherland. Trying to find her bearings after Iceland’s financial crisis, the narrator is additionally unmoored by her search for love. Even if the novel is a thinly disguised lament about environmental degradation and societal ills, which can be wearing, the narrator’s voice is refreshing, and her concerns are authentic; add to that a tour of gorgeous Iceland and parts of Europe through the eyes of a native. Eir’s narrator challenges readers: 'Won’t you continue to be considered a nationalist if you say that the citizens of a country should be responsible for their fosterland and its natural resources?'”