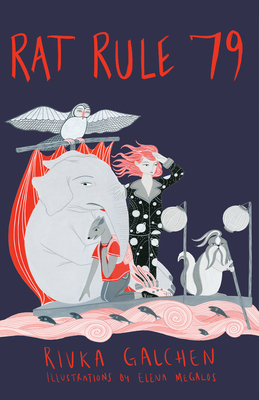 From the New Yorker “20 Under 40” author of Atmospheric Disturbances comes a brain-twisting adventure story of a girl named Fred on a quest through a world of fantastical creatures, strange logic, and a powerful prejudice against growing up.

Fred and her math-teacher mom are always on the move, and Fred is getting sick of it. She’s about to have yet another birthday in a new place without friends. On the eve of turning thirteen, Fred sees something strange in the living room: her mother, dressed for a party, standing in front of an enormous paper lantern—which she steps into and disappears.

Fred follows her and finds herself in the Land of Impossibility—a loopily illogical place where time is outlawed, words carry dire consequences, and her unlikely allies are a depressed white elephant and a pugnacious mongoose mother of seventeen. With her new friends, Fred sets off in search of her mom, braving dungeons, Insult Fish, Fearsome Ferlings, and a mad Rat Queen. To succeed, the trio must find the solution to an ageless riddle.

Gorgeously illustrated and reminiscent of The Phantom Tollbooth and The Wonderful Wizard of Oz, Rivka Galchen’s Rat Rule 79 is an instant classic for curious readers of all ages.

Praise For Rat Rule 79: An Adventure…

“Rat Rule 79 is the adventure I didn’t know I wanted until it started, just like it’s the book you don’t yet know you’re going to love. We have been waiting for this book our entire lives.”

"I love this book. It’s a wonder. I wish I’d had Rat Rule 79 when I was a boy. I’d have been obsessed with Fred and her adventures and reread her funny sweet story a hundred times, always finding something new.”

—James Gleick, author of The Information and Isaac Newton

“Lewis Carroll, Norton Juster, Tove Jansson, Russell Hoban; like them, Rivka Galchen has written a book for children and adults that occupies its own delightful and preposterous space. Rat Rule 79 feels like it has simply been waiting to fall into our laps.”

“Fred is a little bit Alice, a little bit Dorothy, but wholly original and smart, smart, smart. This is exactly how I like my word play. Can't decide if I'm more enamored with the Insult Fish or the Elephant in the Room. Prime mother-daughter book club fodder.”

"Rivka Galchen's Rat Rule 79 is clever and strange and so very much fun, but what makes Rat Rule 79 so remarkable is the warmth and wisdom that exudes from its pages. A subversive Wizard of Oz for kids too smart for their own good, it's sure to become many a young readers' favorite book for years to come."

“Witty, clever, and bright, Rat Rule 79 is a timeless adventure for readers of all ages. Filled with logic problems, riddles, and sharp word play, the Land of Impossibility is a place you will want to visit again, and again, and again. The characters are vibrant and unique, the prose is snappy and engaging, and the illustrations are whimsical, even with their limited color palette.”

“Clever and fully entertaining, this humorous middle grade is perfect for parents AND young readers. I love the wordplay, the puzzles and the omnipresent narrator offering asides to the reader. Highly recommend!”

"It has all the joys of The Phantom Tollbooth and Alice in Wonderland. It playfully exposes the holes in logic as presented through language. That sounds too snooty. It's silly and deep at the same time with fun conundrums to ponder far beyond the last page."

“I really enjoyed this book because of the non-stop humor and interesting/diverse characters. Fred is a girl who has had to move many times because of her mom's work. When she moves to Twin Falls, ID, she stumbles upon a glowing lantern that ultimately leads her to a unique world where time is outlawed and no birthday parties are allowed. Fred meets many friends along the way, and they are all amazing animals who help Fred to not only free the Rat Queen but also to finally celebrate her birthday. This story was full of adventure and wacky chapter headings, too.”
—Alex, age 10, City of Asylum Bookstore Young Readers Board (Pittsburgh, PA)

“Rat Rule 79 is an impossibly perfect book: a Mobius strip where the love loops continuously between mothers’ daughters and daughters’ mothers, law and disorder, the lost and the found. Fred is a heroine for the ages—a twelve-year old savant of mathematical and emotional truths and a connoisseur of peanut butter and pickle sandwiches, Fred is smart enough to navigate irrational lands, demands, and numbers, and brave enough to love the strangest strangers. Rat Rule 79 belongs on a shelf of classics with The Phantom Tollbooth, Mrs. Frisby and the Rats of NIMH, and The Last Unicorn. How can it be that Galchen's epic, so utterly, enchantingly new, also gave me the happiest deja vu while reading? How can the Dark, Dark Woods be such an illuminating place? These and other paradoxes fill Galchen's astonishing, hilarious, mind-and-heart-expanding book. As I read, I thought, ‘I can't wait to share this with my daughter, son, mother, brother, sister, best friend…’ a number set that eventually swelled to include: everyone.”
—Karen Russell, author of Swamplandia
— Karen Russell, author of Swamplandia

“Is there anything Rivka Galchen can't do?! Rat Rule 79 is that book I always longed for as young reader, full of adventure, quirky characters, and short chapters. Speaking of which, the chapter headings alone are worth the price of admission and good for a few chuckles. The storytelling by Rivka Galchen is enough to keep you riveted, but the gorgeous full-page illustrations by Elena Megalos really bring the book to eye-popping life. I dare you to read the first forty chapters and not get hooked.”

“One of the most ingenious children’s books I’ve seen in ages. Full of intelligence, warmth, and wit. A page-turner in its own right!”

“A smart, witty through-the-looking-glass journey about a thousand unusual, interesting things and all the big important ones, too: home, friendship, holding on, letting go, and growing up.”
—Nicole Krauss, author of The History of Love and Great House
— Nicole Krauss

"Rivka Galchen's Rat Rule 79 is clever and strange and so very much fun, but what makes Rat Rule 79 so remarkable is the warmth and wisdom that exudes from its pages. A subversive Wizard of Oz for kids too smart for their own good, it's sure to become many a young readers' favorite book for years to come."

“On the night before her 13th birthday, Fred can’t sleep. She gets out of bed and sees her mother walk through a lantern. Fred follows her into a magical land filled with highly rational, unreasonable rules (or is it highly reasonable, irrational rules?). In the ensuing puzzles and conundrums, Rivka Galchen delivers joy and cleverness reminiscent of The Phantom Tollbooth, Alice in Wonderland and Hayao Miyazaki movies as she playfully exposes the holes in logic as presented through language. From the quirky chapter headings to the deadpan illustrations by Elena Megalos, it is a wonderful read (and re-read) for kids and adults.”
—Philipp Goedicke, NPR Best Books of 2019
— NPR Best Books of 2019

“It’s impossible to read Galchen’s novel without being reminded of Norton Juster’s The Phantom Tollbooth. It revels in wordplay and the off-kilter logic that governs the fantastic land that Fred, a nearly 13-year-old girl, enters by stepping through a giant paper lantern in pursuit of her mother…. It is an immensely imaginative, mind-bending journey that explores dealing with change and growing up. Short, creatively titled chapters feature line drawings and lovely illustrations in red and slate blue. Galchen’s first book for children is full of heart and celebrates unconventional thinking.”
—Julia Smith, Booklist
— Julia Smith

“Along with new friends Downer the elephant and Gogo the mongoose, Fred embarks on an epic series of adventures to find her mother and locate the infamous Rat Queen. Peppered throughout the sweetly playful text are tidbits of wisdom that highlight the perceived injustices of youth and the qualities of growing older. Galchen’s charming middle-grade debut is filled with life lessons wrapped in occasionally over-the-top wordplay, and Megalos’s whimsical salmon-tinged illustrations provide a delightful counterpoint…. the novel’s underlying messages are as timeless as its tethers to classic works of children’s fantasy.”
—Publishers Weekly
— Publishers Weekly

Rivka Galchen is an award winning fiction writer and journalist who loves noodles and numbers and modest-sized towns where her dad might have worked. Her work appears often in The New Yorker, Harper’s, The London Review of Books and The New York Times. She is the author of three books: Atmospheric Disturbances (Novel, FSG, 2008), American Innovations (Short Stories, FSG 2014) and Little Labors (Essays, New Directions, 2016). She has received numerous prizes and fellowships, including a Guggenheim Fellowship, a Rona Jaffe Fellowship, The Berlin Prize and The William J Saroyan International Prize in Fiction. In 2010, she was named to The New Yorker’s list of 20 Writers Under 40. Galchen also holds an MD from Mount Sinai School of Medicine. Rat Rule 79 is her first book for young readers.

Elena Megalos was raised in the City of Angels. When she was twelve-going-on-thirteen she dreamed of writing the cookie fortunes for her beloved neighborhood Chinese restaurant, The Unicorn. That, or illustrating a book for children. This is her first one. See more work at elenamegalos.com.
Loading...
or support indie stores by buying on