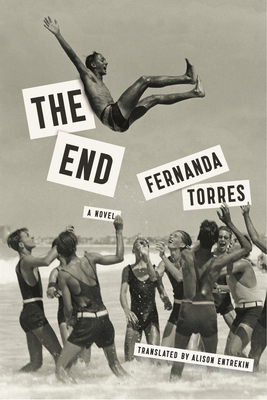 In this deadly-funny debut novel by renowned Brazilian actress Fernanda Torres, five macho friends in Rio’s Copacabana reflect on their hedonistic glory days—now supplanted by the indignities of aging—in what turn out to be their final moments.

With uncanny insight into the less virtuous corners of the male psyche, Fernanda Torres brings us five friends who once milked the high life of Rio’s Bossa Nova age and are now left with memories—parties, marriages, divorces, fixations, inhibitions, bad decisions—and the grim realities of getting old. Álvaro lives alone and bemoans the evils of his ex-wife. Sílvio can’t give up the excesses of sex and drugs. Ribeiro is a vain, Viagra-abusing beach bum. Neto is the square, a faithful husband until the end. Ciro is the Don Juan envied by all—but the first to die. Cutting in on these swan songs are the testimonies of those the men seduced, cheated, loved, and abandoned: their wives and children. Edgy, funny, and wise, The End is a candid tropical tragicomedy and an epitaph for a lost generation of machos.

Praise For The End…

“The intense but tenuous bonds of male friendship give shape and structure to this energetic, impressive debut from acclaimed Brazilian actress Torres. Set against the vivid backdrop of Copacabana, the episodic novel follows five contentious and devoted friends—Ciro, Silvio, Neto, Alvaro, and Ribeiro—from the hedonistic nights of their youth to the humbling days of old age. Beginning with the violent death of Alvaro, the group’s last surviving member, the story meticulously works it way back through the complicated lives of each friend, culminating with the operatic death of Ciro, who retains a spark of youth until his last moments. Torres paints a sharp, intimate portrait of male sexuality and psychology (including the experience of aging), illuminating the friends’ profound differences (such as between the decadent Silvio and the meeker Ribeiro) while never undermining the believability of their connection. As assured as the characterizations of the central characters are the investigations of the men and women who surround them, the wives who abide their exploits and the priests who speak at their funerals. The narration and momentum remain lively and sharp throughout.”

“Set in Rio de Janeiro, this fine literary debut from one of Brazil’s most distinguished actors tells the stories of five men as they approach their inevitable (and in some cases premature) ends. By turns tragic and hilarious, the novel is about friendship, betrayal and excess, and about male fury against the ravages of old age.”

“The End is the perfect summer release. Torres creates an aging, male Carioca friend group that is a mess of cynicism, nostalgia, frustration, and a seemingly unending appetite for sex. This book is raunchy, sophisticated, and so wonderfully Brazilian. I devoured this book in one sitting. Parabens Fernanda!!!”

"The year of 2013 would have been worth it for Fernanda Torres' novel alone. How beautiful it is to see an authentic literary talent emerge so clearly…. In her debut The End, she goes beyond just being a good writer. Her tone is so well crafted."

“You think you see The End coming—or the ending coming—but Fernanda Torres has other plans for you on this journey.  Torres presents five friends—fairly flawed, tragic clowns—and their views on life and those around them as they try to navigate their lives and deaths. This novel is a funny, smart, well conceived, and perfectly executed playful look at mortality.”

“Famed actress Fernanda Torres’s debut novel, The End, is a brutally unflinching look at the lifelong friendships of five aging male friends and the women in their lives.… [Torres has an] agile hand at establishing voice, pacing, and tone. Hers is strong, economical prose.… The machismo of each character is impressively rendered.… The End is vivid and irascible as it confronts the reality of aging, regrets, and death.”

“Torres’ writing [has] flair and wit… [an] unforgiving portrait of men at their worst.”

Alison Entrekin
is an acclaimed translator from the Portuguese. Her work includes short fiction and poetry for anthologies and literary magazines, in addition to children’s fiction, biographies, and novels, including City of God by Paulo Lins; The Eternal Son by Cristovão Tezza, shortlisted for the IMPAC Dublin Literary Award; Near to the Wild Heart by Clarice Lispector, shortlisted for the PEN America Translation Prize; and Budapest by Chico Buarque, shortlisted for the Independent Foreign Fiction Prize. She is a three-time finalist in the New South Wales Premier’s Translation Prize & PEN Medallion.
Loading...
or support indie stores by buying on