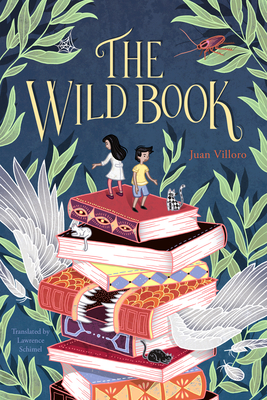 From one of Mexico’s foremost authors comes a wondrous adventure story of a boy who goes to live with his kooky, book-obsessed uncle in a library where books have supernatural powers.

“We walked toward the part of the library where the air smelled as if it had been interred for years….. Finally, we got to the hallway where the wooden floor was the creakiest, and we sensed a strange whiff of excitement and fear. It smelled like a creature from a bygone time. It smelled like a dragon.”

Thirteen-year-old Juan’s summer is off to a terrible start. First, his parents separate. Then, almost as bad, Juan is sent away to his strange Uncle Tito’s house for the entire break! Who wants to live with an oddball recluse who has zigzag eyebrows, drinks fifteen cups of smoky tea a day, and lives inside a huge, mysterious library?

As Juan adjusts to his new life among teetering, dusty shelves, he notices something odd: the books move on their own! He rushes to tell Uncle Tito, who lets his nephew in on a secret: Juan is a Princeps Reader, which means books respond magically to him, and he’s the only one who can find the elusive, never-before-read Wild Book. But will Juan and his new friend Catalina get to The Wild Book before the wicked, story-stealing Pirate Book does?

An unforgettable adventure story about books, libraries, and the power of reading, The Wild Book is the young readers’ debut by beloved, prize-winning Mexican author Juan Villoro. It has sold over one million copies in Spanish.

Juan Villoro is Mexico’s most prolific, prize-winning author, playwright, journalist, and screenwriter. His books have been translated into multiple languages. Several of his books have appeared in English, including his celebrated 2016 essay collection on soccer brought out by Restless Books, God Is Round. Villoro lives in Mexico City and is a visiting lecturer at Yale and Princeton universities.

Lawrence Schimel (New York, 1971) is a full-time author, writing in both Spanish and English, who has published over one hundred books in a wide range of genres. He is also a prolific literary translator. His picture books have been selected for the White Ravens from the International Youth Library in Munich, Germany and have twice been chosen for IBBY’s Outstanding Books for Young People with Disabilities, among many other awards, honors, and Distinctions. His work has been published in Basque, Catalan, Croatian, Czech, Dutch, English, Esperanto, Estonian, Finnish, French, Galician, German, Greek, Hungarian, Icelandic, Indonesian, Italian, Japanese, Korean, Maltese, Polish, Portuguese, Romanian, Russian, Serbian, Slovak, Slovene, Spanish, Turkish, and Ukrainian translations. He started the Spain chapter of the Society of Children’s Book Writers and illustrators and served as its Regional Advisor for five years. He also coordinated the International SCBWI Conference in Madrid and the first two SCBWI-Bologna Book Fair conferences. He lives in Madrid, Spain and New York City.

Praise For The Wild Book…

“Books are portals to other worlds. In The Wild Book, a young boy learns about the power of stories when he explores his uncle’s enchanted library of shape-shifting books. This is a beautifully written ode to the inherent magic of books and reading. … Translated by award-winning Lawrence Schimel, Juan Villoro’s prose is lovely and clear. Villoro, “Mexico’s Updike,” is his nation’s most prolific, prize-winning writer. The Wild Book is no exception within his canon. Each of the twenty-one chapters is accompanied by Eko’s stunning woodcut-style illustrations, depicting books with teeth and pages flying. Deserving a place beside classics like The Phantom Tollbooth and Half-Magic, The Wild Book is a timeless celebration of reading.”

“For me, when it comes to good writing, texts are alive and living among us, no matter the genre. Juan Villoro’s The Wild Book — a story in which books themselves are characters — is an especially good example.... In Uncle Tito’s library, the books choose their readers. So Villoro’s novel chose me…. Equal parts ecology and magical realism, Villoro explores the nature of literature and reading. The best stories are wild, after all.... Villoro entrusts young readers to care for and sustain the magic — and in doing so, takes them seriously. But the novel is also generous with its adults … Uncle Tito, changes and grows just like Juan, the teenage protagonist…. Villoro’s novel illuminates why YA literature has such a large adult readership. Even as we age, or perhaps especially then, our purpose is not to tame our life stories — but rather to allow them their wild lives.”

"Brings to mind the same ecstatic thrill I felt reading The Phantom Tollbooth as a child, Fahrenheit 451 as a teen, and Mr Penumbra's 24-Hour Bookstore as an adult. I'm absolutely envious of the young readers who are about to discover the magic of Juan Villoro's The Wild Book."

“This quirky tale – originally published in Mexico – is a delight, giving books a life of their own. Before long, you'll see your reading list in a whole new way…. The Wild Book has a classic, magical feel, but it's also grounded in reality, as we see Juan coming to terms with his parents' separation and his feelings for Catalina, the girl who works in the local pharmacy. And Tito is a wonderfully rich character, from his constant need to urinate to his obsession with creating literary recipes. A must-read for book-lovers everywhere.”

“A rewarding and bewitching story which goes to the heart of why books are so powerful and incredible. From exploring how the person reading a story changes the very fabric of the story being read, so that one book can mean quite different things to different people, to how stories help us navigate our lives, often providing opportunities to practise scenarios before we encounter them in real life, thereby giving us skills, confidence and resilience, The Wild Book is a paean to the potential of books. If you consider yourself a bibliophile, this, quite simply, is a must-read.

In some ways a Library of The Shadow of the Wind for younger readers, The Wild Book luxuriously riffs on how books can be mirrors and windows…. Delicate, fine and surprising turns of phrase pack this novel, originally published in Mexico, mixing moments of humour with splashes of original beauty. The smooth and seamless translation is a delight, as are the glimpses into another culture, with lots of references to exploring the Amazon, and some nods towards literature from South America.... Apart from the glorious celebration of stories, I also loved how The Wild Book movingly and sensitively navigates a teenage boy’s changing relationship with some of the adults in his life, and in particular with his father and uncle. Coming of age novels explore how a protagonist grows up and their relationship to themselves changes, but Villoro’s novel also touches on how Juan’s feelings towards his father and uncle change, with a growing realisation that how you perceive the adults in your life as a young person may not be the be-all and end-all of what those adults are really like.

The emotional sensitivity of Villoro’s novel is nuanced and subtle. It’s glorification of food, however, is a divine and triumphant indulgence.... I could have a lot of fun writing a cookery book companion to go with The Wild Book! Perfect for intrepid book explorers who relish getting lost inside the pages of a book, The Wild Book is a dazzling adventure you’ll not want to miss.”

—Zoe Toft, Playing by the Book

“Rich on multiple levels, a cast of colorful characters, plots and twists galore, and plenty of humor, author Juan Villoro weaves his words with a style that will delight older kids, start to finish, making The Wild Book a wild ride, indeed."

“It’s so much fun. If you like books, if you like books about books, it’s great for anyone at any age… It’s like Shadow of the Wind or Mr. Penumbra “The Early Years”—it’s really fun!”

“Yonder makes good on its promise of diverse offerings with its first titles, beginning this October with the release of The Wild Book, written by Mexican author Juan Villoro and translated by Lawrence Schimel. The middle grade novel is about a boy who goes to stay with his eccentric, book-collecting uncle, who takes him on a quest to find the infamous wild book that has never allowed itself to be read; it is illustrated by Mexican artist Eko.”

“This book is awesome. It is very interesting; there are just so many books, and it strikes on so many topics. It is also a great adventure story, one that is even believable because the author’s name is also Juan, so that is really funny. I like how the Wild Book acts – the books are characters in this story, too, and some of them become good friends with Juan and help him. This is a great story for anyone who loves books like I do!”