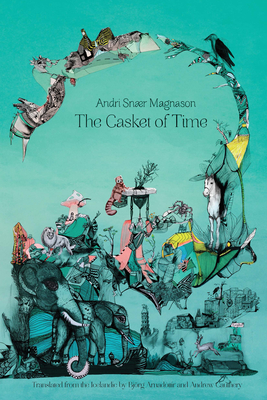 The Casket of Time

An entrancing adventure for today’s troubled planet, The Casket of Time is a fantastical tale of time travel and environmental calamity from celebrated Icelandic author Andri Snær Magnason.

Teenage Sigrun is sick of all the apocalyptic news about the “situation” and, worse, her parents’ obsession with it. Sigrun’s family—along with everyone else—decides to hibernate in their TimeBoxes®, hoping for someone else to fix the world’s problems . But when Sigrun’s TimeBox® opens too early, she discovers an abandoned city overrun by wilderness and joins a band of kids who are helping a researcher named Grace solve the “situation.”

The world, according to Grace, is under an ancient curse. There once was a princess named Obsidiana, who was trapped in time by the greedy king of Pangea. To protect Obsidiana from dark and gloomy days, the king put her in a crystal casket made of spider silk woven so tightly that time itself couldn’t penetrate. The king’s greed for power doomed his kingdom and the trapped princess. Sigrun sees eerie parallels between the tale of Obsidiana and the present-day crisis, and realizes it’s up to her and her friends to break the ancient curse and fix the world.

Praise For The Casket of Time…

“The love child of Chomsky and Lewis Carroll."
— Rebecca Solnit, author of Call Them by Their True Names

"I have not previously seen the fairy tale genre so well tied up with a sci-fi story, a fantasy tale and a contemporary drama all at once. It really is elegant and full of surprises. I am therefore not at all surprised that the book has already won a few awards in Iceland. It would not surprise me if it also won the Nordic Council Children and Young People‘s Literature Prize."
— Weekendavisen, Denmark

“The story confronts the concept of time and twists old fairy-tale memories with a passionate creativity.”
— The Nordic Council Children and Young People’s Literature Prize

“A sparkling and entertaining adventure story in two time eras with a clear moral which, however, never turns into a sermon.”
— Frettabladid

“The largest box of chocolate written in the Icelandic language that I have ever laid my hands on... This is confectionery for the mind! Wow! It is so good that I forgot to make notes ... This is a book for the 3 year old, the 30 year old, the 300 year old.”
— Audur Haraldsdóttir

“Here we have a timeless fairy tale, and Magnason’s depiction of this magical world is magnificently well realized.”
— Jon Bjarki Magnusson

"This is a book I would put on a shelf with The Hobbit, Alice in Wonderland and The Little Prince. A children's story but it would be very good for adults to read it as well."
—Eric Lorberer of Rain Taxi Review
— Rain Taxi Review

"I loved this book so much — it is a cerebral tale, well told and unabashedly philosophical. So grim that I fear it will not be for everyone…But despite the beheadings, the grave-robbing, the people casually thrown to the lions, the central message of the book is clear, and it’s welcome. Greed hurts us; power ruins us; and time has never been our enemy. Indeed, Magnason reminds us, as long as our tendency toward self-destruction doesn’t get in the way, time is the earth’s, and humanity’s, greatest healer.”
—Kelly Barnhill, New York Times Book Review
— New York Times Book Review

“The power of story animates a tale that communicates—but is not overpowered by—urgent messages.”
—Kirkus Reviews
— Kirkus Reviews

Andri Snær Magnason is an Icelandic writer, born in Reykjavik on the 14th of July 1973. Andri has written novels, poetry, plays, short stories, essays and films. He studied Icelandic literature at the University of Iceland. His novel LoveStar got a Philip K. Dick Special Citation, the Grand Prix de l’Imaginaire in France, and “Novel of the year” in Iceland. The Story of the Blue Planet was the first children’s book to receive the Icelandic Literary Award and has been published or performed in 35 countries. The Story of the Blue Planet received the Janusz Korczak Honorary Award in Poland 2000. Andri has collaborated with various artists. He has been active in the fight for preserving the nature of Iceland. His book Dreamland: A Self Help Manual for a Frightened Nation takes on these issues and has sold more than 20,000 copies in Iceland. He co directed Dreamland, a feature-length documentary film based on the book. Footage from and an interview with Andri can be seen in the Oscar Award winning documentary Inside Job by Charles Ferguson. His most recent book, The Casket of Time, has now been published in about 10 languages and was nominated as the best fantasy book in Finland 2016, along with books by Ursula K. le Guin and David Mitchell. Andri Snær lives in Reykjavík with his wife Margrét, four children, and a dog.
Loading...
or support indie stores by buying on