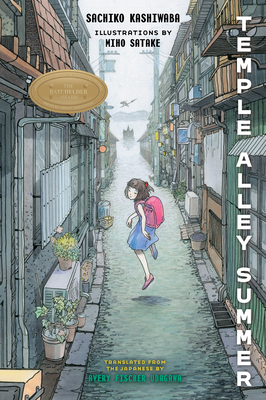 “Temple Alley Summer is like a three-in-one book — a manga-like feel, a modern Japanese story, and fable, all in one. I loved the ghost girl, Akari, and the genuine Kazu. This could be a read aloud or a stand-alone book. One of my summer picks!”
— Kira Wizner, Merritt Bookstore, Millbrook, NY
View the List

A July/August 2021 Kids' Indie Next Pick

Kazu knows something odd is going on when he sees a girl in a white kimono sneak out of his house in the middle of the night--was he dreaming? Did he see a ghost? Things get even stranger when he shows up to school the next day to see the very same figure sitting in his classroom. No one else thinks it's weird, and, even though Kazu doesn't remember ever seeing her before, they all seem convinced that the ghost-girl Akari has been their friend for years

When Kazu's summer project to learn about Kimyo Temple draws the meddling attention of his mysterious neighbor Ms. Minakami and his secretive new classmate Akari, Kazu soon learns that not everything is as it seems in his hometown. Kazu discovers that Kimyo Temple is linked to a long forgotten legend about bringing the dead to life, which could explain Akari's sudden appearance--is she a zombie or a ghost? Kazu and Akari join forces to find and protect the source of the temple's power. An unfinished story in a magazine from Akari's youth might just hold the key to keeping Akari in the world of the living, and it's up to them to find the story's ending and solve the mystery as the adults around them conspire to stop them from finding the truth.

About the Author: Sachiko Kashiwaba is a prolific writer of children's and young adult fantasy whose career spans more than four decades. Her works have garnered the prestigious Sankei, Shogakukan, and Noma children's literature awards, and her novel The Mysterious Village Veiled in Mist influenced Hayao Miyazaki's film Spirited Away. She lives in Iwate Prefecture. About the Illustrator: Miho Satake is a Japanese artist and illustrator. She is best known for illustrating the classic fantasy novel Howl's Moving Castle by Dianna Wynne Jones, three books in the Kiki's Delivery Service series by Eiko Kadono, and also illustrated the twentieth anniversary Japanese editions of the Harry Potter series. About the Translator: Avery Fischer Udagawa grew up in Kansas and studied English and Asian Studies at St. Olaf College in Minnesota. She holds an M.A. in Advanced Japanese Studies from The University of Sheffield. She has studied at Nanzan University, Nagoya, on a Fulbright Fellowship, and at the Inter-University Center for Japanese Language Studies, Yokohama. She writes, translates, and works in international education near Bangkok, where she lives with her bicultural family.
Loading...
or support indie stores by buying on