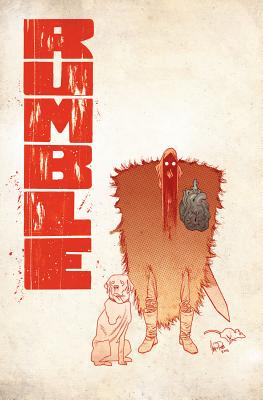 A Woe That Is Madness

Rathraq, an ancient warrior God, has been resurrected in a modern American city as a scarecrow The enraged Rathraq went on a mad hunt to get his old body back, causing havoc for twenty-something bartender Bobby LaRosa and his friends Now, in the second volume of Rumble, Rathraq's battle against the immortal monsters that killed him centuries ago takes a weird turn. Gradually, this rabid warmonger loses track of who his enemy is - and the formerly reluctant, levelheaded LaRosa gets drawn into the fray against a new kind of evil Meanwhile, Cogan the trickster God plays both sides against each other - which has its own dangers. A strange, blood-spattered, unpredictable tale of anger and love that takes you from filthy city sewers to a prehistoric paradise where fantastic beasts and Gods fight over the birth of Humankind. Extended sketchbook section and lots of extras.