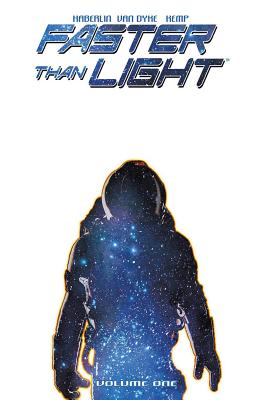 In the very near future we discover the secret of faster-than-light travel. Suddenly the universe is wide open to us, but are we ready for it? With all the idealism of the original Star Trek and the grit and immediacy of Gravity and The Martian, the story of humanity's first thrilling and terrifying adventures to the stars takes flight The trade also features over 25 Augmented Reality pages to use with your smart device, that are interactive as well as over 30 pages of backstory/appendix information that impacts and adds to the conventional comic storytelling. Brian Haberlin is a comic book artist, writer, and editor. He began his career in comics working at Top Cow Productions, where he co-created the Witchblade comic. He then co-founded Avalon Studios, which published many successful fantasy and sci-fi titles, including Stone, Aria, Area 52, The Wicked and M-Rex. Haberlin also served for two years as Editor in Chief of Todd McFarlane Productions and penciled and inked its flagship title, Spawn. He currently runs Digitalarttutorials.com and teaches comic art at Minneapolis College of Art and Design. He is also a contributor to 3d World and ImagineFX magazine, and his work is in the permanent collection at the Smithsonian Museum.
or
Not Currently Available for Direct Purchase
Copyright © 2020 American Booksellers Association