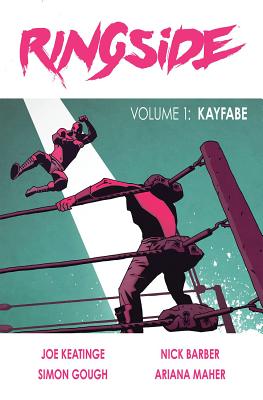 RINGSIDE is a series set within the world of professional wrestling, written by JOSEPH KEATINGE (SHUTTER, GLORY, TECH JACKET) and drawn by acclaimed illustrator NICK BARBER, combining the ensemble drama approach of THE WALKING DEAD with interconnected rotating perspectives akin to "The Wire." RINGSIDE explores the relationship between art and industry from the view of the wrestlers themselves, the creatives they work with, the suits in charge and the fans cheering them all on. But that's just the beginning. The real violence is outside the ring. Collecting issues 1 through 5. Praise for RINGSIDE:
"Keating and Barber's RINGSIDE is a realistic peek behind the scenes and into the lives of several characters connected to a glory-seeking world, but their lives are anything but glorious and that's the compelling hook this issue sells so well." - Comicbookresources.com "RINGSIDE is a realistic drama set in the world just outside the wrestling ring. Keatinge and Barber present a modern-noir comic book that mixes gritty characters, realistic situations and goes to the dark corners of life that people try to avoid. This comic delivers a compelling first issue and the series promises to be a deep and emotional ride. This is definitely worth picking up." -- Comiclist