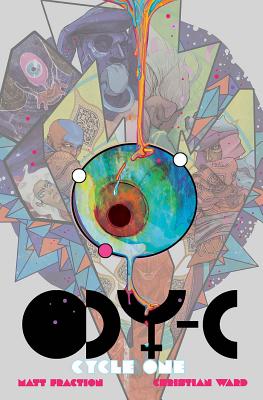 ODY-C, modeled after Homer's Odyssey, is a psychedelic, gender-broke science-fiction epic that tells the story of three legendary warrior-queens returning home after a centuries-long battle. Odyssia, of fair Ithicaa, encounters everything that can get in her way and slow her homecoming -- and realizes with dawning horror that maybe she doesn't want to return. Queen Ene, she who rules the universe, reclaims her husband He of Troiia only to find herself trapped in a place where even the Goddesses cannot see -- a secret world of men gone mad. And as for Queen Gamem, she has a date with her lovelorn wife and a warm bath of her own blood... Told in verse with a visual sensibility that redefines the very possibilities of the comics medium, this gloriously oversized hardcover collects issues #1-12 plus exclusive bonus materials including essays by classicist Dani Colman, teaching aids, and a massive ten-page fold-out only available in the sold-out first issue. Fraction and Ward are doing wildly imaginative work combining fantastic Greek mythology with futuristic science fiction, and the book has a visual sensibility unlike anything else on the stands. -- A.V. Club