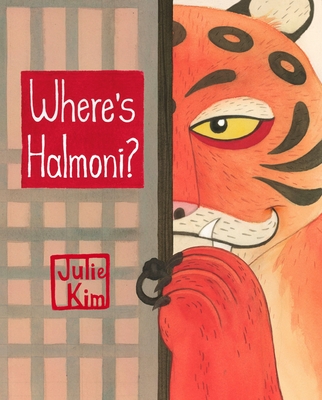 “. . . features two young Korean American siblings who take a trip through a magical portal into a land filled with characters from old Korean fables. . . Kim is making a statement about the loss of culture among children of immigrants while also writing a book that returns some of that to them.”
—Jay Caspian King, The New York Times

Beautifully illustrated and told by debut author Julie Kim, this authentic voices picture book in graphic-novel style follows a young Korean girl and boy whose search for their missing grandmother leads them into a world inspired by Korean folklore, complete with mischievous goblins (dokkebi), a greedy tiger, a clever rabbit, and a wily fox.

Two young children pay a visit to Halmoni (grandmother in Korean), only to discover she's not home. As they search for her, noticing animal tracks covering the floor, they discover a window, slightly ajar, new to their grandmother's home.  Their curiosity gets the best of them, and they crawl through and discover an unfamiliar fantastical world, and their adventure begins.  As they continue to search for their grandmother and solve the mystery of the tracks, they go deeper into a world of Korean folklore, meeting a number of characters who speak in Korean along the way, and learn more about their cultural heritage.

This beautifully illustrated graphic picture book is filled with a number of Easter eggs for readers of all ages to discover, and is inspired by the Korean folktales that author and illustrator Julie Kim heard while growing up. Translations to Korean text in the story and more about the folktale-inspired characters are included at the end.

The genius of Kim’s book is that the two kids have started to lose their ability to speak Korean and cannot really understand what the rabbits, goblins and tigers are saying to them. Kim, then, is making a statement about the loss of culture among children of immigrants while also writing a book that returns some of that to them.--New York Times

"Gloriously illustrated, full of wit and whimsy, and always staying true to the traditional tales being referenced, this book deserves every starred review it has received." —School Library Journal

“Go deeper into the world of Korean folklore and experience their cultural heritage in unexpected ways.” —Kid Lit Frenzy

“Young readers who adore classic fairytales will want to escape into this story again and again.”
—Bookish

“This bright book...is fun for all ages.” —Motherhood Moment

"Where’s Halmoni? is spectacular. Julie Kim has created a book to share with young readers that truly celebrates family, playfulness, mischief and the beauty of Korean folktales." —Read it Real Good

"Infused with Korean folklore, gorgeous, action-packed illustrations, and a pair of siblings on a quest to find their grandmother, this is an absolutely delightful adventure." —This Picture Book Life

JULIE KIM is an author and illustrator living in Seattle, WA. A graduate of the Rhode Island School of Design, her illustrations have been featured in several children's books including My Special Space, The Mysterious Spinners, and Gloria's First Day. Kims' work has also been featured in magazines including Cricket, Cicada, Ladybuy, Babybug, Scholastic, and Mondo. Where's Halmoni? is her authorial debut.
Loading...
or support indie stores by buying on