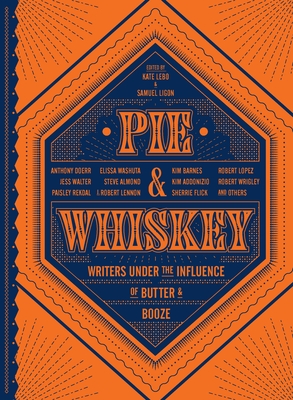 Writers under the Influence of Butter & Booze

If you love pie, whiskey, and good writing, this collection of funny and heartbreaking stories, poems, and recipes serves up a plethora of pleasure.

Praise For Pie & Whiskey: Writers under the Influence of Butter & Booze…

"This project began as a reading series organized by [Kate] Lebo and [Sam] Ligon, in which they sent 12 writers a pie and whiskey prompt to inspire new work. Six years later, they have created an anthology that’s just as eclectic, drunk and delicious."
—The New York Times

"In vino, veritas; in whiskey, wit; in pie pleasure. With that Latin-inspired preamble, we are called west to an all-American literary event held annually in Spokane and Missoula named Pie & Whiskey. And yes, pie and whiskey are served while seriously talented writers read their new works loosely based on, yes again, pie and whiskey."
—Foreword Reviews


"This book is small enough to fit in somebody's Christmas stocking, and it also contains a lot of swearing. Of course, those are both selling points for the right person."
—Wired.com

“[Part of] the 2017 author lineup for Wordstock.”
—Artlandia

“the best of the booze- and sugar-fueled essays, poetry and fiction and nonfiction stories.”
—The Inlander

“This book brings writers together with food and booze and lets the words flow as freely as the drink.”
—Seattle Refined

"The anthology features an all-star cast of the best of the Northwest and beyond — Jess Walter, Kim Barnes, Steve Almond — and runs the range of profane to profound, and both. Just my style."
—The Register-Guard

"...'pie and whiskey' falls right into the Goldilocks zone of themes."
—Seattle Review of Books

KATE LEBO is the author of Pie School and A Commonplace Book of Pie. Her essay "The Loudproof Room" appeared in New England Review and was chosen for Best American Essays 2015. Her poems, essays, and recipes have appeared in Best New Poets, Gastronomica, the Washington Post, Poetry Northwest, and elsewhere. She lives in Spokane, Washington.

SAMUEL LIGON is the author of two novels—Among the Dead and Dreaming and Safe in Heaven Dead—and two collections of stories, Wonderland, illustrated by Stephen Knezovich, and Drift and Swerve. He edits the journal Willow Springs, teaches at Eastern Washington University in Spokane, and is artistic director of the Port Townsend Writers’ Conference. Ligon lives in Spokane, Washington.
Loading...
or support indie stores by buying on