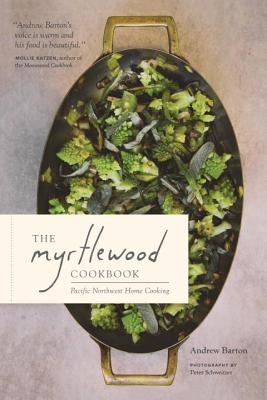 Experience beautiful home cooking that takes its cues from the kitchen gardens and forest harvests of the Pacific Northwest. Andrew Barton and his friends run Secret Restaurant Portland, a monthly supper club. After hosting dinners for five years, a culinary style emerged that reflected his practical approach to cooking: accessible recipes alive with flavor, lovely on the plate and the palate. The Myrtlewood Cookbook brings forth 100 recipes that amplify the tastes, colors, and textures of summer tomatoes, fall mushrooms, winter roots, and spring greens. You will gain nearly as much from reading these recipes as from cooking them. Whether you are inspired to make Nettle Dumplings in Sorrel Broth, Candied Tomato Puttanesca, or Russet/Rye Apple Pie, be prepared to swoon under the spell of Myrtlewood.*

*The Myrtlewood tree is found on the same ground as fiddlehead ferns, nettles, and other wild foods characteristic of the Pacific Northwest. The plates, bowls and cutting boards carved from Myrtlewood shown in this book connect to the land where this cookbook was created.

ANDREW BARTON is a preschool teacher by day. He has co-run Secret Restaurant Portland since 2010, putting on dinners for 15 to 60 people, themes and style varying upon location and inspiration. He also curates, edits, designs, and letterpress prints a series of books under the name Two Plum Press. MyrtlewoodPNW.com


PETER SCHWEITZER is a freelance photographer who has captured the mood of Secret Restaurant Portland since 2012. For over ten years he worked on a continual documentary project, photographing a moment from his life every day between 2006 and 2017.

“Andrew Barton’s voice is warm and his food is beautiful. The sense of place—the ambiance—will draw you in and make you feel freshly appreciative of simple, everyday possibilities. In a world overflowing with cookbooks, this quiet gem stands out.”
—Mollie Katzen, author of the Moosewood Cookbook

“[Part of] the 2017 author lineup for Wordstock.”
—Artlandia

“Andrew Barton, the chef behind the Secret Restaurant in Portland, Oregon, cooks food that he feels exemplifies the region.”
—New Worlder

"Experience beautiful home cooking that takes its cues from the kitchen gardens and forest harvests of the Pacific Northwest."
—AM Northwest (KATU)

"A taste of home with seasonal salads and risottos."
—I'll Have What She's Having

"With The Myrtlewood Cookbook, Andrew Barton has created an arresting collection of recipes gathered from Secret Restaurant Portland. Accompanied by lush photography, his instructions are thoughtful, meticulous, and spiced with personal guidance; I felt as if I was cooking in the kitchen with a highly skilled, yet patient friend."
—Elliott Bay Book Company, Fall Booknotes

"This cookbook is unabashedly PNW to its core, from the cutting boards carved from native Myrtlewood trees to the mushrooms that pop up in soup, risotto, and pizza. Unlike most cookbooks, Barton’s recipes read more like an actual book; each dish spans multiple pages with paragraphs in the place of ordered steps. Barton’s conversational tone is certainly homey, as is the food itself."
—Seattle Met

'The recipes in the book are flavorful, easy-to-prepare, and attractive to serve."
—Epicurus

"Barton writes as if he were standing in the kitchen with you, offering cooking tips within the recipes."
—The Register-Guard