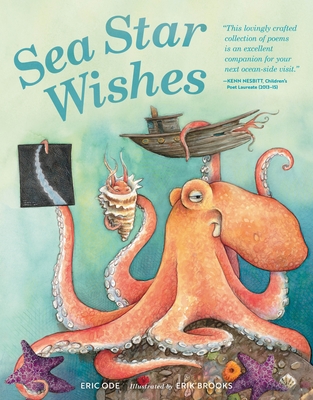 Selected as a Children's Poet Laureate Monthly Book Pick, Sea Star Wishes captures the varied and colorful world of our beautiful coastal shores. Discover the wonders of the sea and enjoy a day at the beach in playful and imaginative poetry and illustrations.

This lovely collection of poems is accompanied by beautiful illustrations of the sealife and surrounding being described in the poems. The combination of the two makes you feel like you're standing on the beach yourself, admiring all there is to see. This book is a fun way to introduce kids to both poetry and some of the creatures of the coast!
Growing My Kids Reviews

ERIK BROOKS is a children's book author and illustrator from Winthrop, WA. He has worked on many books, including If I Were a Whale, Totem Tale, Who Has These Feet, and Polar Opposites, which won the 2011 Washington State Book Awards Scandiuzzi Prize for Children's Picture Books.
Loading...
or
Not Currently Available for Direct Purchase