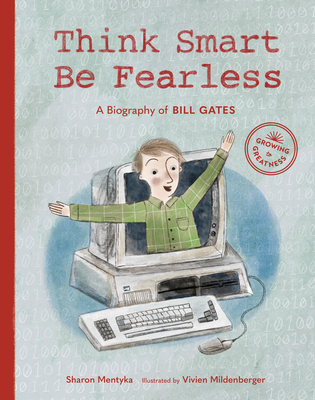 A Biography of Bill Gates (Growing to Greatness)

How do fearless ideas begin? Travel along with young Bill Gates on his life's journey full of curiosity, discovery, hard work, and most important, fearlessness--the inability to see limits. The book invites young readers to pursue their passions and awaken a sense of ambition and responsibility for others as they grow.

Think Smart, Be Fearless tells the inspiring story of Bill Gates, one of America's most fascinating entrepreneurs, starting from his early years as a precocious, inquisitive child who faced challenges fitting in with his classmates. Young Bill, known as Trey in his family, was a bit of a troublemaker, bored at school and prone to acting out. That all changed in high school with his discovery of the early world of computers. His instincts immediately told him that computers were the future. With the support of his family, who encouraged him to think smart and be fearless, Bill grew to become a technology visionary, who changed the way everyday people interact with computers, and a philanthropist whose inability to see limits is working to reduce poverty and improve global health worldwide.

Complete with back matter that includes a more in-depth look into Bill Gates's life, a timeline of significant events in his life and in computer science, and a glossary for inquisitive kids.

Praise For Think Smart, Be Fearless: A Biography of Bill Gates (Growing to Greatness)…

"Eye-opening for young people who often take their technology for granted." --Kirkus Reviews

"Mildenberger renders her naïf illustrations in muted hues, and relevant visuals—zeroes and ones, computer keyboards, and myriad worries—ribbon through spreads." --Publishers Weekly


"Mildenberger’s enchanting illustrations are full of clever thematic details, like the clouds of zeroes and ones that follow Gates around after he discovers coding."--School Library Journal

SHARON MENTYKA is a writer, designer, and teacher whose stories grow from small kernels of truth and explore common themes: fairness, transitions, and the complicated path to finding your own voice. Her middle-grade novel Chasing at the Surface was named the 2016 children's winner of the National Outdoor Book Award.

After graduating from ArtCenter College of Design in Los Angeles, VIVIEN MILDENBEGER packed up her pencils and moved to a lovely farm just outside of Nashville, Tennessee. There she works on her illustrations, pottery, and other general magic-making. She loves illustrating for children most of all. Vivien is also an avid bread baker and shares her farm adventures with her fiancé, two cats, and dog, Peter. Her work has been featured by publications such as New American Paintings and American Illustration. Publishing clients include Houghton Mifflin Harcourt, QuartoKids, Little Bee, Penguin and Macmillan/Henry Holt.
Loading...
or
Not Currently Available for Direct Purchase