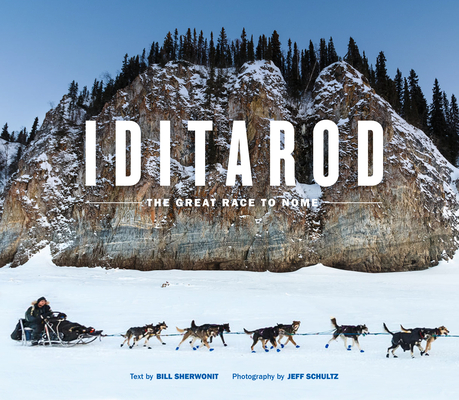 The Great Race to Nome

This is the definitive story of the Iditarod, the dogsled race that has been run for over a century--told in brisk inviting stories and fully illustrated with color photographs, including updated information through the 2018 race.

The famed 1000-mile dogsled race from Anchorage in Southeast Alaska to Nome on the Bering Sea is a test of endurance, both human and canine. The great history of the race has unfolded in the accounts of mushers and dog teams, fierce weather, accidents and good luck--with personalities like Joe Redington Sr., Rick Swenson, and Libby Riddles being joined by Lance Mackey, DeeDee Jonrowe, and Mitch & Dallas Seavey in recent years. The book is thoroughly illustrated with Jeff Schultz's photography, including coverage of the most recent runnings of the Iditarod.

An Alaska resident since 1982, Bill Sherwonit is a nature writer and essayist. He’s the author of more than a dozen books, among them Animal Stories: Encounters with Alaska’s Wildlife and Changing Paths: Travels and Meditations in Alaska’s Arctic Wilderness. Sherwonit’s work primarily focuses on Alaska’s wildlife and wildlands, but he’s passionate about wild nature in all its varied forms.

Jeff Schultz has been the official photographer for the Iditarod Trail Committee since 1982. An internationally published photographer, his Alaskan images have been reproduced in numerous books, calendars, newspapers, and magazines, including National Geographic, Sports Illustrated, TIME, and Audubon. He is also the owner and principal photographer at AlaskaStock Images. He lives in Anchorage with his wife and two children.
Loading...
or support indie stores by buying on