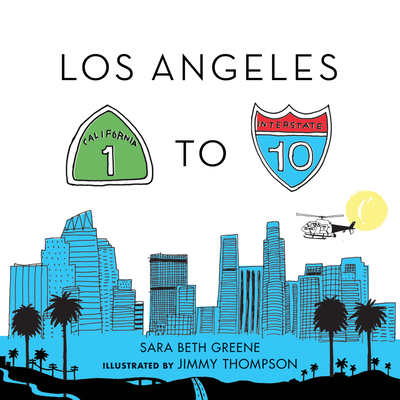 Teach your little ones to count from one to ten with this fun, brightly colored board book that features the diverse culture of Los Angeles.

Los Angeles 1 to 10 celebrates the city's diversity from the hills of Griffith Observatory to the music of Mariachi Plaza, from Watts Tower to the breezes of the Pacific Ocean. Filled with colorful modern illustrations, this book is a fun way to introduce young children to this culturally rich city. Little readers and their families will enjoy this colorful board book that celebrates the City of Angels.

"[O]ne of the most adorable board books we've seen in quite some time....perfect as your baby's first introduction to our vast and varied city."
—Red Tricycle

As a music video and film producer, SARA GREENE has worked with a diverse range of artists from Adele and Morrissey to Mike Mills and Rick Rubin. Most recently she's turned her focus to writing and taking care of her daughter, both of which inspired her to create this book series.

JIMMY THOMPSON lives and works in Los Angeles. He studied at California Institute of the Arts, receiving his BFA in Character Animation in 2004. He cofounded the Brainbow design studio in 2008. The studio has collaborated on motion and design projects with clients ranging from television networks to musical artists and global brands, most notably for the short film The Schwarzenegger Trilogy, commissioned by the Standard Hotel and screened at The Hammer Museum. His artworks have been shown at Cella Gallery, Dax Gallery, Eastern Projects, and The Lodge Gallery in the Los Angeles area.
Loading...
or support indie stores by buying on