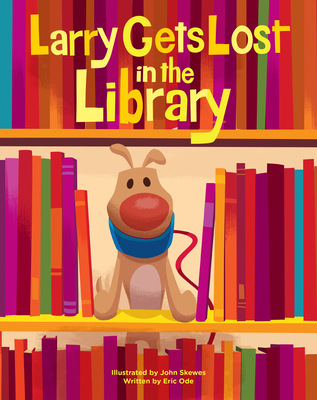 Larry Gets Lost in the Library

This new addition to the best-selling Larry Gets Lost series, featuring the perpetually lost pup, Larry, celebrates libraries and librarians.


Larry, a playful pup, loves to go on vacation with Pete. In this edition they visit Pete's grandparents on a farm. When a bookmobile arrives, Pete is excited to select a stack of books. As Pete reads, he doesn't notice that Larry, in search of a snack, wanders into the bookmobile.

Larry's adventure begins when the librarian drives away, not realizing Larry is on board, to return the bookmobile to the city library. Larry, searching for Pete, soon finds himself lost inside the library, where he is surrounded by busy librarians and patrons enjoying books. But will he ever find his way back to his best friend Pete?

ERIC ODE is a national award-winning children's singer, songwriter, author, and poet who performs for schools, libraries, and community events. He is also the author of Sea Star Wishes, Bigfoot Does Not Like Birthday Parties and co-author of Larry Gets Lost Under the Sea.


JOHN SKEWES began work as a product designer and character artist for Disney Consumer Products before leaving to start his own company, Retrodyne Industries, in 2001. His clients include Warner Bros., Hanna-Barbera, Fox, Pixar, Simon & Schuster and Amazon. As the creator and illustrator of the award-winning Larry Gets Lost children's book series, John has followed Larry from the southern tip of Texas to tiny Nome, AK, and has been lost several times himself. He has illustrated over 30 children's books, including the Elliott the Otter, A Ticket to the Pennant and the Wetmore Forest books. He now works for Funko in Everett, Washington.