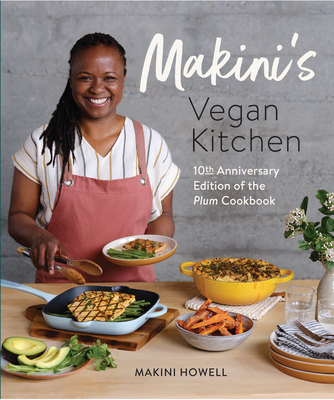 
Nationally renowned chef and entrepreneur Makini Howell shares her innovative plant-based recipes in this anniversary edition of the original Plum cookbook. These inspired recipes from one of the highest-ranked vegan fine-dining restaurants in the country are not only mouthwatering and hearty, but are also allergen-friendly and often gluten-free, soy-free, or both. Cooking vegan with Makini proves that living a meat-free life can include satisfying and tasty food.

"We so appreciate the wonderfully creative recipes in this very beautiful cookbook! The importance of delicious vegan food helps pave the way for those who desire to make the transition from the standard animal-based diet."
—Joaquin Phoenix, Academy Award-nominated actor and activist; Summer Phoenix; Rain Phoenix; and Liberty Phoenix

"Makini Howell’s cookbook will prove to anyone just how delicious vegan cuisine can be. Her food is flavorful, fresh, and mouthwatering. A must-have for anyone who loves to eat. This is a cookbook I will buying for my friends and family."
—Kim Barnouin, co-author of the New York Times Best Seller, Skinny Bitch

"The food at Plum Bistro is comfort food, fresh food, tasty and innovative food: a testament to the talented and driven owner and head chef, Makini Howell. It’s one of my favorite vegan restaurants in the world."
—India.Arie, Grammy Award-winning singer/songwriter

"What Makini does at Plum and as a personal chef is creative, innovative, and satisfying. . . . Instead of seeing ‘vegan’ as a restriction, she has her own style. I never feel like I am missing anything."
—Common, Grammy Award-winning actor, author, artist, and activist

"I dare you to open this cookbook from Seattle's Plum Bistro to any page and not think the recipe you find there is completely irresistible. Tiramisu pancakes? Check. Cauliflower bisque with fresh fennel? Yes, please. Black plum and ginger sorbet? Oh, you know it. Chef Makini Howell's recipes are vibrant, wholesome, and absolutely popping with all the fresh flavors of the season. ...Oh, and did I mention they're all vegan?"
—The Kitchn


"From Seattle food icon Makini Howell comes this much-anticipated cookbook, a luscious volume of recipes from the author’s family-owned restaurant, Plum Bistro. Howell’s cooking is all about simple, fresh, and local, and this photo-filled book...showcases such delights as Pesto Plum Pizza, Barbecue Oyster-Mushroom Sliders, and Fresh Blueberry Shortcake. Let the mouthwatering commence."
—VegNews


"You don't have to be a vegan to love these healthy creations from the famous Plum Bistro."
—Examiner.com

"This colorful vegan cookbook from Seattle-based Plum Bistro captures the spirit and passion of chef, owner, and life-long vegan Makini Hawell with her recipes for vegan spins on pantry essentials, breakfast favorites, small plates, mains utilizing tofu, tempeh, and seitan, and desserts. Many of the recipes are also gluten-free and soy-free, but the book's luscious photos are sure to whet anyone's appetite, dietary restrictions or no."
—Portland Monthly

"The vegan chef makes it look easy, with chapters on replacements for conventional staples (egg foam, anyone?), a helpful dissection of meat substitutes, and even a few mostly raw dishes for those in transition. Highlights: tostadas with spicy strawberry avocado relish, and balsamic tofu with white bean sauce and agave pumpkins. Most recipes are soy and/or gluten free and definitely aren’t all broccoli and turnips; expect recipes for sinful—yet morally sound—treats like tiramisu pancakes and tempeh vermouth."
—Seattle Metropolitan

"These recipes are for dishes full of flavour, texture and colour. Oh, and they’re vegan."
—The Montreal Gazette

MAKINI HOWELL is a lifelong vegan who believes that what is good for the individual will be good for the planet. Makini is passionate about creating a beautiful and stylish dining experience for vegans, foodies, and omnivores in her restaurant group, Plum Restaurants, as well as a small-batch line of Makini’s Kitchen brand tofus. In 2015, she was Stevie Wonder’s personal chef during his yearlong tour and was named one of “16 Black Chefs Changing Food in America” by the New York Times. She focuses on organically grown seasonal vegetables, non-GMO soy, and organic and local fruits and herbs from family-owned farms, in flavorful combinations that are both familiar and surprising.
Loading...
or support indie stores by buying on