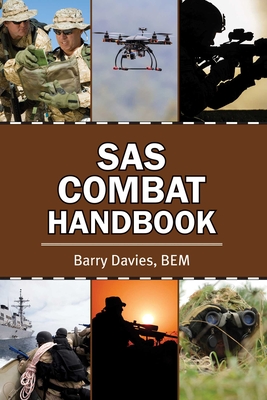 An SAS soldier explains the battle history of this prestigious military service, while teaching how you can defend yourself in both hand-to-hand and military combat.

Seventy years after its inception, the Special Air Service (SAS) is recognized by many as one of the most decorated military forces in the world. Their soldiers do battle on a daily basis, taking actions that are normally swift, very hard hitting, and extremely secretive. They will go—willingly—deep behind enemy lines, taking on incredible odds and risking their lives in the hope of rescuing others.

In the SAS Combat Handbook, you will be informed on all aspects of SAS operations. With never-before-seen photographs of these heroes in action and untold stories of individual acts of bravery, you will be taught the key combat methods that have made this military group exactly what they are: elite.
Included are training tips that will teach you about various military tactics, such as:

The art of cover and remaining hidden behind enemy lines
The keys to covert insertion and extraction operations
Counterterrorism skills, including building entry, ambush, and sniping
Fire battles on land, in the air, or at sea
And so much more

From the gathering of intelligence to undercover operations, the SAS is made up of two hundred men who are rigorously selected, highly trained, and ready to face what others fear. They know what it takes to get the job done, and no matter the situation, their combat skills are the best in the business.

Barry Davies, BEM spent eighteen years in the British Special Air Service serving around the globe. He participated in the storming of the hijacked Lufthansa plane at Mogadishu in 1977 and was awarded the British Empire Medal. He is the author of The Complete SAS Survival Manual and The SAS Self-Defense Handbook. Davies lives in England.
Loading...
or
Not Currently Available for Direct Purchase